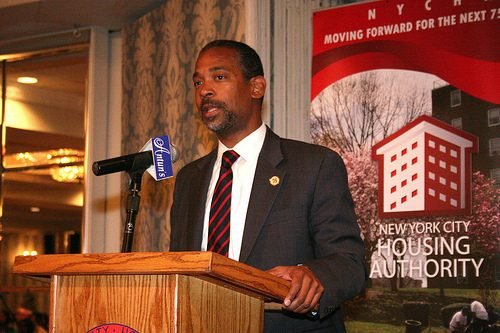 Browsing through the large stacks of report-back sheets from People's Relief volunteers in Coney Island, it was clear that food, safety, health and other life-threatening issues were still being faced almost two weeks after Hurricane Sandy knocked out power and flooded much of the area.

One building report read, "FEMA told canvassers not to go in because of methane build-up, residents unaware of this." Methane is an explosive gas known to leak from landfills or to form when fecal mater decomposes.

Another report mentioned a man in need of insulin--"Ran out 2 days ago." Another said residents are worried about an elderly homebound neighbor who has not answered the door in days.

Coney Island resident Taneen Watkins said she found out about the People's Relief distribution of supplies in the area through word of mouth. Though she's a mother of five whose home was flooded by 11 feet of water during Sandy, she volunteered on Sunday at a church at 2828 Neptune St.

"You stay home, you're not going to hear anything. I come outside, so that's how I hear everything, she said."

But for homebound senior citizens, people with disabilities or people living on the top floors of high-rise apartment buildings without power, going outside was--and in some cases still is--much harder than it seems. In many cases, it's simply impossible.

"Every day, we have been going into the buildings, and every day the medics have found people whoneed serious medical attention," said Adrien Weibgen, an organizer with People's Relief, an impromptu group of civilian volunteers who started working in Coney Island on Nov. 4. "The city, NYCHA, nobody has been doing door-to-door checks at all.

"In terms of somebody taking responsibility to regularly check on residents, this entire time, this has absolutely not been done by the city, or NYCHA or the Red Cross or even FEMA. Personally, I don't think a ragtag group of volunteers should be coordinating door-to-door checks to make sure people are not dying."

But while many grassroots relief organizers and residents told the Amsterdam News that government-led relief efforts, the Red Cross, FEMA and NYCHA have not been present in providing relief, officials have continuously said they are indeed doing so.

Directly following the hurricane, the city set up warming centers and many shelters throughout affected areas. FEMA and the Red Cross also had food and supply trucks driving through affected areas, although many residents say they could not get down to the street level to reach them.

On Nov. 9, City Housing Authority Chairman John Rhea said, "Volunteers were critical to this effort. We organized those volunteers, and when people called and offered to go directly to our buildings, we coordinated them through the NYC Service corps effort so that again it could be done in an organized way and with safety for both the volunteer and the resident."

City press releases, 311 and city officials point to NYC Service as a big part of the city's relief efforts and a way that civilians can volunteer. NYC Service is a citywide initiative launched by Bloomberg in April of 2009 to "help more New Yorkers connect to service opportunities more easily, target volunteers to address the city's greatest needs and promote service as a core part of what it means to be a citizen of the greatest city in the world," according to its website. So it appears the city is very organized in its relief and volunteer efforts.

But if they can find a tiny link in the center of the NYC.gov homepage, would-be volunteers are directed to nycservice.org. A search on NYC service brings up various links to community groups doing hunger relief but no canvassing or door knocking opportunities for volunteers to plug in to. After a call to NYC Services, would-be volunteers would then find out that "New York Cares is taking volunteers on to do these things, and you can actually go to their website, which is nycares.org, and look to see what projects are open, but you have to register with them, not New York Service."

While Rhea said on Nov. 9 that NYCHA had already set up "door-knocking campaigns throughout those buildings with a particular focus on residents who have some form of disability or who might be challenged," Samantha Levine, a representative from Bloomberg's office, said the city only started sending out medical door-to-door teams on Friday, Nov. 9, 11 days after Sandy hit and the same day Rhea spoke to the Amsterdam News.

"Medical teams (including a paramedics, members of the National Guard and members of the Health Department) going door to door in the high-rises in Coney Island and Rockaways to assess and provide medical care and medication to those without power. It began this past Friday," Levin wrote in an email on Tuesday, Nov, 13. A press release from the mayor's office on Tuesday explains the extent of this work, saying that thus far, the door-knocking teams had reached 18,365 buildings and visited more than 6,500 residents.

That effort came far later than many grassroots groups that did the same thing. At the Gowanus Houses in Brooklyn, the power went off in five buildings on Oct. 29, and community members say they came together to help themselves. Families United for Racial and Economic Equality (FUREE), a group that organizes low-income families to "build power to change the system," helped residents take over a usually unused community center to create a coordinated relief effort to get every person in Gowanus Houses food, water, blankets and medicine in the wake of the storm. They say they did all of this without any help from a government agency.

"That Sunday [November 4], officials from NYCHA came in to sit down and have a talk with us to find out what we were doing, how we were making the efforts and to make sure that NYCHA residents were quote/unquote safe, because they didn't know the impact of five buildings being out," said Beverly Corbin, a FUREE board member who lives just a block away from Gowanus. "They told us they were going to send people from FEMA in to help, that they were going to offer us social work for our children who were devastated. But none of that was done."

Likewise, Nazli Parvizi, commissioner of the Mayor's Community Affairs Unit, and two others from her team were in Coney Island on Sunday, Nov. 11, talking with organizers from the People's Relief about how the city can help the grassroots efforts. People's Relief organizers said while they had seen about 50 volunteers from the NYC Service corps late last week, almost two weeks after the storm hit, the bulk of their volunteers came from their own networks. Part of that network is another grassroots group, Occupy Sandy, a branch of the Occupy Wall Street movement that is explicitly not affiliated with any government agency and that has been sending volunteers and supplies all over the city from their relief hub in Brooklyn.

Still, representatives from government agencies insist that they have been organizing the volunteer and relief efforts. In response to residents and volunteers claiming they had not seen NYCHA or the city doing volunteer work, Rhea said, "That's just not true. With all due respect, I understand people are frustrated and are in situations where I wouldn't want it for my family, and I am absolutely focused in the front of my mind on how do we serve these families."

He continued, "Having said that, I think it's a bit of a mischaracterization to say that they haven't seen NYCHA.'s"

Organizers in Gowanus houses said they had seen few city officials actually follow through and help them. One who did was Brooklyn City Council Member Steven Levin, who joined residents and neighbors carrying food and supplied up the 17 floors in two of the Gowanus buildings and helped organizers connect to and understand the politics around their situation.

But beyond simply not showing up, NYCHA also went so far as to try to stop the Gowanus relief efforts entirely.

"They told us we had to leave Tuesday. They came in Monday [Nov. 12] to take our stuff out ... on Veterans Day, on a holiday," Corbin said. "We were there, so that stopped them from taking [the relief donations], so we got a lot of our stuff out and sent it to the Rockaways, to Red Hook and to Staten Island. We moved the clothes and all that stuff because they said they needed the space for party rentals."

However, even in the face of this polarizing move, most grassroots groups said they do not want to throw the authority under the bus entirely.

Volunteers in Coney Island and the Lower East Side noted that NYCHA has continuously seen its funds cut by the U.S. Department of Housing and Urban Development.

"Unfortunately, sometimes--for example, all the articles that the Daily News runs about NYCHA and how shoddy they are--sometimes that can fit into an agenda that is somewhat conservative about demonizing public housing, saying it shouldn't exist or we shouldn't have public housing, instead of upholding the promise of what it could be," said Lucas Shapiro, senior organizer at FUREE. "That is something we are also trying to be sensitive about."

NYCHA's website says it is "committed to increasing opportunities for low- and moderate-income New Yorkers by providing safe, affordable housing and facilitating access to social and community services."