Harlem School of the Arts fall benefit a resounding success 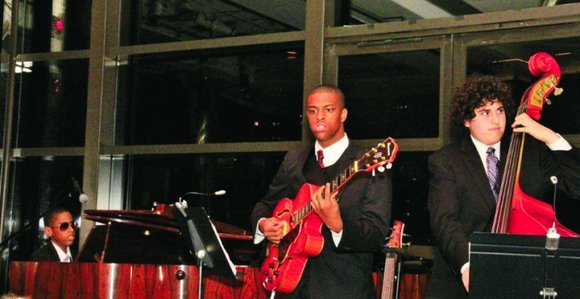 Harlem School of the Arts fall benefit a resounding success

The Harlem School of the Arts, the community-based cultural and educational institution serving children and families of all backgrounds for nearly 50 years, held its fall 2012 benefit at Lincoln Center's Stanley H. Kaplan Penthouse amid a buzz-worthy atmosphere with leaders drawn from the philanthropic, civic, business, social, cultural, entertainment and media sectors.

Hosted by Fox News' Arthel Neville, the event raised more than $200,000 to support HSA's world-class arts training programs. The event honored legendary musician Herb Alpert. Along with his wife, singer Lani Hall, Alpert recently gifted the Harlem School of the Arts with a landmark $5,050,000 donation, bringing their total giving to HSA to more than $6 million since 2010.

Hamilton stated, "This is a remarkable time for the Harlem School of the Arts as we commemorate an historic occasion in the near 50-year history of the school."

HSA President Campbell commented, "Thank you, Herb Alpert. The lives of the students will be forever transformed due to your generosity and the vision of the Herb Alpert Foundation."

The event featured live performances by the school's Advance Jazz Combo and excerpts from Disney's "Lion King." Guests enjoyed the performances and atmosphere with views of Manhattan's West Side skyline in the background while hors d'oeuvres were served amid a lovely fall setting of dahlias and candlelight.

A major highlight of the evening was the special tribute to Alpert featuring Mayor Michael R. Bloomberg, who submitted a witty and fitting video in which he stated, "Herb Alpert, I want you to know how much it means to all of us in New York City that you would choose to reach out from across the country to help us save one of the most valuable institutions. You're an extraordinary artist and a truly extraordinary benefactor. On behalf of 8.4 million New Yorkers, congratulations, Herb, and congratulations to the Harlem School of the Arts."

Rona Sebastian, president of the Herb Alpert Foundation, added, "The gift from the Herb Alpert Foundation was designed to put the Harlem School of the Arts on a path to recovery and bring in other funders. We allowed them to own their building again and help establish a strong future. It was exciting to see the Harlem School of the Arts kids perform at the Lincoln Center benefit on Wednesday night."

Moyers added, "Herb Alpert is a creative genius. His career continues to flourish and he continues to use his gifts as an artist and a philanthropist to make our world a better place."

Clearly moved by the tribute, which also included personal messages from recording artists Sting and Bryan Adams, who are among the countless artists whose careers were shaped by Alpert and his A&M Records, Alpert commented that the event was "a touching and unforgettable night for me, capped off by a thrilling performance by the students of the Harlem School of the Arts, who showed us how creativity can transform lives."