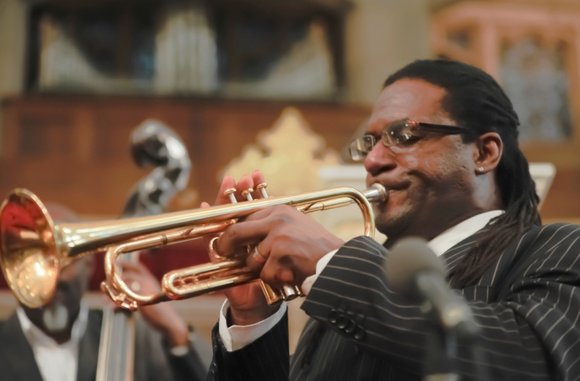 Most tourists who flock to Harlem and line up outside the churches hope to get in and hear an inspired gospel choir. Those lucky enough to get a seat at Abyssinian Baptist Church on a recent Sunday were in for a double treat, as they got a glorious dose of "Amazing Grace" from the spirited choir and jazz from a quintet led by trumpeter Marcus Printup and tenor saxophonist Walter Blanding, both members of the Jazz at Lincoln Center Orchestra.

Pianist Onaje Allan Gumbs and bassist Leon Dorsey opened "Jazz Vespers," and after several tuneful original compositions, they settled most effectively on Billy Strayhorn's "Daydream." With an intricate though webby chordal technique, Gumbs voiced the melody in various colors and Dorsey had the perfect bass lines to give the song an even deeper, haunting quality.

Printup's latest CD, "Homage," is dedicated to a roster of famous trumpet players so it was no surprise that he lit into "Mr. Kenyatta" in memory of Lee Morgan. A series of sharp staccato notes was Printup's way of referencing Morgan's fiery style; this was quickly burnished by a cascading burst of energy at the horn's highest pitch. He is a strong, impressive player, and it took someone of Blanding's mettle to stay comfortably in his soaring orbit.

Monk's "Evidence," with its tricky intervals, was negotiated superbly, and pianist Sullivan Fortner offered his own homage to the great composer, his delivery an assortment of tinkle and abrupt rhythmic thunder.

When the group was joined by harpist Riza Printup, Marcus' wife, and vocalist Eunice Newkirk on Duke Ellington's "Come Sunday," everything was suddenly

perfectly appropriate. Newkirk's voice can be as churchy as it can be bluesy, and she eased from one to the other effortlessly and with a genuine feel for the lyrics.

Each of the musicians took solos and bassist Gerald Cannon and drummer E.J. Strickland seized the opportunity to showcase their sensitive interpretation of the old standard.

In his opening remarks, the church's pastor, the Rev. Dr. Calvin O. Butts III, recalled previous jazz moments at the church, particularly a performance by Sonny Fortune. He said he asked Fortune why he extended his solo so long and Fortune told him the Holy Ghost got him. Well, that same Holy Ghost must have been hovering in the church and touched trombonist Chris Crenshaw during his brief stint below the pulpit.

There was a glow on the faces of the visitors from overseas as they sat enthralled by the sweet sounds, totally seduced by the majestic swing of the music. Perhaps the Holy Ghost had them too.