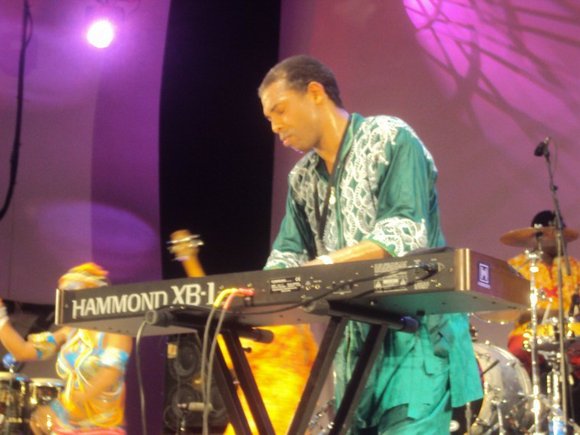 2011 was a good year for the international Afrobeat superstar Femi Kuti-a very good year. Professionally, multiple blessings rained down upon him, beginning in April with the release of his critically acclaimed album "Africa for Africa" (Knitting Factory, 2011). In addition, his triumphant 21-city North American tour brought in the crowds in the United States and Canada, and as the year came to an end, Kuti's "Africa for Africa" received a Grammy Award nomination for Best World Music from the National Academy of Recording Arts and Sciences, presenters of the coveted annual prize.

When asked his feelings about all of his latest accomplishments, notably "Africa for Africa" being distinguished for its extraordinary artistic merits, an extremely humble Kuti replied, "I am very happy, thank you, but I have to work harder."

When Kuti talks about working harder, one wonders how much harder one man can work. The gifted, driven artist is a brilliant composer/musician/vocalist/bandleader/entrepreneur whose business portfolio includes the current installation of the popular nightclub Afrika Shrine, which he co-owns with his sister, Yeni, who manages the enterprise.

Modeled after the world-renowned Africa Shrine created in the '70s by their legendary father, Fela Anikulapo Kuti, the originator of the Afrobeat genre, today's version, like the elder maverick, serves as both a place of entertainment and a think tank for a social and political movement.

Similar to his father, who was both an artist and an activist, Kuti is equally involved in fighting for justice, equity and a corruption-free Nigeria as he is an advocate for an innovative, prosperous, united Africa where peace reigns.

Born in London several seasoned decades ago, he was named Olufela Olufemi Anikulapo Kuti. Blessed with an innate sixth sense, like a seer Kuti is intuitively in touch with the world-physically and spiritually. Consequently, he is adept in his lyrics at predicting things that are destined to happen.

This is evident on "Africa for Africa"; tracks such as "Politics in Africa," "Can't Buy Me," "Africa for Africa" and "Bad Government" foreshadowed what came to pass in Africa in 2011, including the recent Nigeria oil subsidy drama that played out this January, with Kuti advocating for the people. (Please see our "Africa Sings!" column from Feb. 2 for more on that uprising.)

When asked about his innate gift to write songs about future events, Kuti responded with sincerity, "I really don't know how I do it, but I just write about what worries me deep down inside."

Kuti also chose another path for recording the album when he decided to use the Decca/Afrodisia studio in his hometown.

"We knew we had to record in Lagos," he said. "My producer Sodi came to check out the studios and said it was the best he could find, that it had a good vibe. The last time we tried we failed because the studio hall and equipment weren't good. Nothing went well for us."

Kuti added, "We felt we should be as simple as possible and as original to my music as possible-less technology to enhance the music. To save cost, we had to try harder to make it work in Lagos."

This is when the lights came on about Kuti's earlier comment about working harder. It is apparent that in Nigeria, as its leading artist, he has to go the extra mile to ensure perfection in his work. Kuti revealed, "It was over 10 years since I worked in the Decca studio; I thought they had packed up. My father did his early albums there in the '70s. Sodi felt we should try and make it work there despite the old, rundown mixer, which made recording complicated, but it had better soundproofing and better engineers."

He paused momentarily reflecting on the positive experience. "It brought back good memories," he smiled. "I'm happy we gave it a try."

"Africa Sings" highly recommends Kuti's acclaimed masterworks for your CD collection. These entertaining, insightful, quality albums will give you a taste of why Kuti's "Africa for Africa" received the Grammy Award nomination for Best World Music.