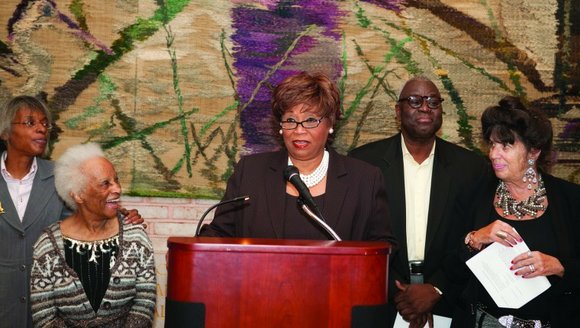 The Interchurch Center was the scene of a gathering of the cream of Harlem's artistic crop, as Community Works paid tribute to a bevy of noted "artivists" with the launch of Community Matters NYC and the debut of the exhibit "Harlem is ... Activism.

This exhibit pays tribute to 30 cultural and community legends, both past and present, who combined art and activism to create and preserve the rich cultural fabric of one of the world's most vibrant and storied communities. It features a magnificent 30-foot photographic timeline of Harlem, developed in collaboration with the Schomburg Center for Research in Black Culture, highlighting key events that have shaped the Harlem community from 1900 to the present.

Christopher Paul Moore, senior researcher and curator at the Schomburg Center, introduced the exhibit, saying, "Harlem has been a haven for immigrants who sought the promise of the American Dream and an oasis for people of the African Diaspora who long sought the promise, too. The history of Harlem is the history of the American Dream--and activism."

"Community Works has done a wonderful job of reminding, inspiring and organizing us to pay tribute to the heroes and sheroes without whom Harlem would not have bloomed," said Mal Woolfolk, son of honoree the late Dr. Muriel Petioni.

Community Works NYC founder and President Barbara Horowitz said, "It's not just me. It's Community Works that has taken this puzzle and put it together in a way to remind people of this rich history that sometimes gets forgotten, while, at the same time, looking to the future."

"In Harlem, we've been doing this for over 10 years. It was so powerful to bring people that we worked with and loved together--a woman like Inge Hardison, who is 98 and still working. It's Harlem's history and I think the thing that was poignant to me is that it's the story of a lot of people who stayed the course. A lot of communities don't have that. These people are Harlem," Horowitz told the AmNews.

"Even as Harlem changes, I believe in my heart that there will be this imprint forever, like the people we honored, just because they are so strong. The work for us is about passing it on. You've got to know your history, not just in Harlem--we all have to know our history and be proud of who he are," she concluded.

"Harlem is ... Activism" is on display now through Nov. 23 at the Interchurch Center, 475 Riverside Drive in Manhattan.

For more about the exhibit and other Community Works events, visit www.communityworksnyc.org.