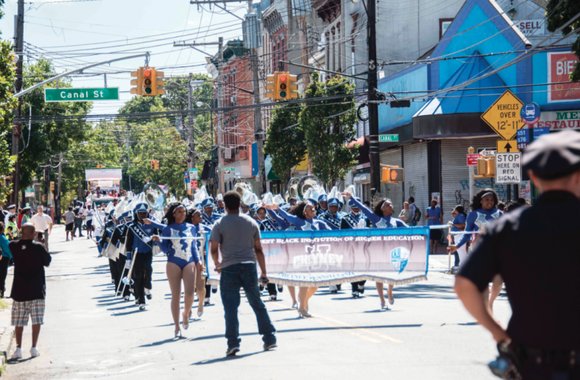 It's not every day that you can walk into a public park and see your state senator doing the electric slide, especially in Staten Island. But that is what happened at the second annual Staten Island Black Heritage Day held in Staten Island's Tappen Park.

A festival filled with music, vendors and a twilight concert was the culmination of a "people's parade" that began at noon on the corner of Richmond Road and Vanderbilt Avenue and voyaged through the Park Hill and Stapleton neighborhoods of Staten Island.

goers who shared in the day's activities. Not only were the floats vividly beautiful, but so were the flags, which featured all the colors of the rainbow, from Liberia to Puerto Rico. The flags could be seen on the hats, hands and back pockets of the onlookers. Front yards and corner stores were lined with folks trying to get a glimpse.

The parade, with its procession of motorcycles and horses, was not only exciting to the many children viewing the event, but also to the community leaders who came out to support it. The Rev. Dr. Demetrius Carolina Sr., pastor of the First Central Baptist Church and a former NY1 "New Yorker of the Week," said, "[The] Staten Island Black Heritage Parade is a culmination of various churches, civic groups, organizations as well as community leaders coming together to make a positive stand for unity amongst our community in Staten Island. We are proud of the fact that ... when we celebrate African-American history, we celebrate all history."

The second annual Staten Island Black Heritage Day was truly a culmination of unity and fun. For more information on the organization and next year's parade, visit www.siblackheritageday.com.