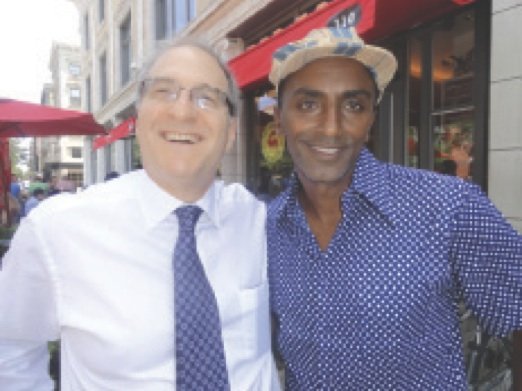 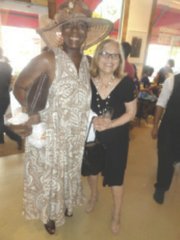 "Fela!" was in Harlem on a recent Sunday morning as members of the "Fela!" group worshipped and enjoyed brunch, music and the beautiful people uptown.

Even the colorful "Fela!" van was present and accounted for, parked outside the historic Abyssinian Church at 132 Odell Clark Place, the group's first stop.

Inside the landmark church, the Rev. Dr. Calvin O. Butts III delivered a powerful sermon about faith to the packed congregation at the 9 a.m. service, which included the worshippers Rep. Charles B. Rangel and Councilwoman Inez Dickens.

Butts acknowledged the Hendels and thanked Rowe, who sang "God and God Alone." He also spoke briefly about Fela Kuti, the Nigerian founder of the Afrobeat genre of music who was also a staunch human rights activist.

Butts mentioned Kuti's irreverence about religion, but at the same time spoke highly about the Nigerian icon's fight for human rights, ending by encouraging his congregation to see the triple Tony Award-winning musical, which returns to Broadway from a groundbreaking international tour for 32 performances, July 9-Aug. 4, at the Al Hirschfeld Theater, 302 W. 45th St.

After the service, the "Fela!" group enjoyed brunch at Marcus Samuelsson's Red Rooster, at 310 Lenox Ave., where Boncellia Lewis brilliantly entertained the restaurant packed with Harlemites, New Yorkers and tourists. She graciously acknowledged the "Fela!" group and invited Rowe to join her in song.

What a wonderful, wonderful day! Let the church say amen or, as Kuti would say, "Everybody say yeah-yeah."