Colony Records was my place for original Black R&B 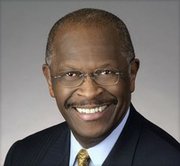 At a mid-October rally in Tennessee for Herman Cain, a little white girl held a sign that read "Honkies for Herman." In addition to getting a laugh, it probably inspired millions who saw it on TV news to look hard at the only serious Black Republican presidential candidate ever as he sits atop national polls for the GOP nomination.

Yet, lots of snarky, anti-Cain stuff has been written-most of it balderdash. As an independent who favors neither Democrats nor Republicans, I abhor personal invective, name-calling and character assassination directed at candidates. It's unseemly and unfair.

However, Cain scares the hell out of the liberal establishment, which seeks to destroy his unconventional candidacy. Except for the outspoken Juan Williams, every left-wing Black and white pundit trashes him simply because he's a Black conservative.

They hate that a leading Black business executive such as Cain is a Republican. They hate that he is revered by the Tea Party, which they swear is racist and anti-Black. Huh?

In essence, the liberal news media and Democrats feel that they own Black voters. If the dynamic Cain was a Democrat, far-left pundits and politicos such as Debbie Wasserman Schultz, chair of the Democratic National Committee, would be falling all over themselves to embrace him. Instead, she viciously puts him down.

Think about it. On a recent "Morning Joe" on MSNBC, host Joe Scarborough, a liberal-leaning ex-Republican congressman from Florida, called Cain "a cartoon character ignorant on foreign policy." Scarborough's clueless co-host-the pathetic Mika Brzezinski-referred to Cain as "that poor man" and called him "a clown." This, from a lightweight who has her job only because her father is ex-National Security Adviser Zbigniew Brzezinski.

CNN ambushed Cain at the start of the Oct. 18 Republican debate with an audience member asking the other six candidates to comment on his bold "9-9-9" tax plan. Each attacked it and minutes later, when asked to respond, Cain was given a mere 30 seconds.

Meanwhile, Bill O'Reilly's hit-job in his Nov. 5 syndicated column about Cain's lack of political experience is ridiculous. In fact, it's why so many Americans are supporting him.

Smears against Cain hit a new low Oct. 30 as left-wing Politico website reported nebulous accusations of sexual harassment 12 years ago by two anonymous females at the National Restaurant Association he headed. Cain said he was "falsely accused," an investigation proved the he said-she said claims "baseless" and that Politico's story was "a witch hunt."