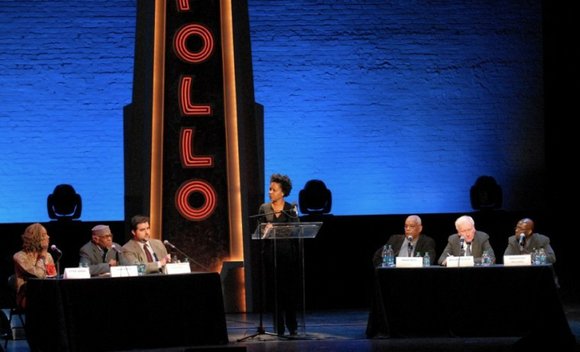 The Apollo Theater opened its doors again for the second installment of the "Uptown Hall" series Tuesday night. This time the community was invited to a free event to watch the second presidential debate and participate in a conversation about various issues concerning the election.

The stage was set as the diverse crowd packed the legendary theater. Doors opened just after 6:30 p.m. and patrons were treated to a panel discussion before the 9 p.m. debate, which was held at Hofstra University on Long Island.

The lively, and at times animated, crowd watched as President Barack Obama and former Gov. Mitt Romney made their way through what many are calling a more heated debate than the first one. Audience members let out cheers and boos for things they liked and disliked during the 90-minute debate. Most of the crowd favored Obama.

"Tonight makes another milestone for the Apollo Theater," said Janelle Procope, president of the Apollo Theater Foundation. "Our role in the community allows for us to engage in the community and conversation that matters. We are getting to hear many different voices and different points of view. We thought it was important to provide this opportunity."

Procope added that the Apollo has always had a commitment to the community to not only provide stellar entertainment on its stage but to also have a hand in participating in politics. Earlier this year, Obama spoke at the Apollo Theater, becoming the first sitting president to grace the legendary stage.

The Apollo Theater kicked off its "Uptown Hall" series with the "Vote Like Your Life Depends on It" panel discussion, which featured T.J. Holmes, the Rev. Al Sharpton and Elinor Tatum, Amsterdam News publisher and editor-in-chief.

"A lot of what we do here at the Apollo is community shaped," said Apollo Theater Community Affairs Coordinator Ade Williams. "People in Harlem will let you know how they feel about anything. The community has dictated what we do on more than one occasion."

The Apollo Theater has plans to continue its "Uptown Hall" series with more events in the near future.