Affirmative action on the line in Supreme Court case 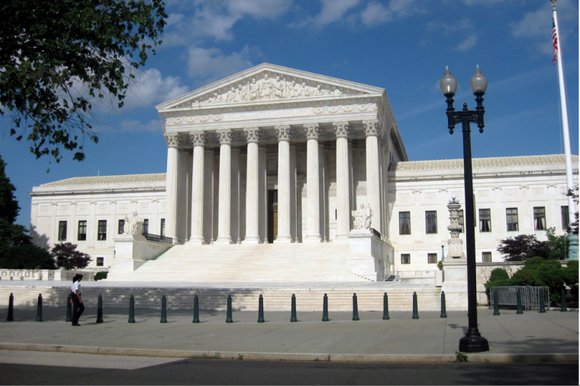 In the nation's capital, the tenant of 1600 Pennsylvania Ave. may not be the only big decision made by early November. In a case brought by a young woman named Abigail Fisher, the Supreme Court can decide the future of Affirmative Action in America's colleges and universities.

In University of Texas v. Fisher, Fisher, who is now 22, contends that she was denied admission into the University of Texas in 2008 because she's white, believing that the school's policies violate the equal protection clause under the U.S. Constitution.

The university states that about a quarter of its incoming classes are filled using race, among other factors. University officials say that it's necessary to provide diverse social and educational experience. Every other slot in the admissions process goes to students based on class rank without race being a factor. The University of Texas' freshman class in 2008 included over 6,600 students. Out of that number, 1,713 were African-American and Hispanic students. Out of that number of Blacks and Hispanics, 216 were admitted under the admissions guidelines that are currently being challenged by the Supreme Court.

Last week, conservative judges went hard at University of Texas' legal representation Gregory Garre over the question of when the court should stop deferring to a university's judgment regarding the necessity of race in college admissions. Justice Samuel Alito wanted to know if upper-middle-class or upper-class Blacks and Hispanics should be admitted over middle-class or working-class whites and Asians.

"They deserve a leg up against, let's say, an Asian or white applicant whose parents are absolutely average in terms of education and income?" asked Alito.

Back in 2003, the Supreme Court upheld the use of race in public universities in a limited role in the Grutter v. Bollinger decision 5-4 in a case involving the University of Michigan Law School. The vote was authored by Sandra Day O'Connor, who has since retired from the court. Her space is currently occupied by Alito, who is conservative. Chief Justice John Roberts, another conservative, was no less harsh on Garre.

"I understand my job under our precedents is to determine if your use of race is narrowly tailored to a compelling interest," Chief Justice Roberts told Garre. "The compelling interest you identify is attaining a critical mass of minority students at the University of Texas, but you won't tell what the critical mass is. How am I supposed to do the job that our precedents say I should do?" Garre continued to emphasize that the University of Texas wanted their student body to be "broadly diverse."

With what some would say is a Supreme Court that leans slightly to the right, affirmative action might be in danger--something that organizations like the NAACP are realizing and aren't letting go without a fight.

In a statement, NAACP President and CEO Ben Jealous said that affirmative action is still a necessary tool to help the disenfranchised on their rise to self-sufficiency.

"In order to succeed in the 21st century, our nation cannot afford for schools to exclude any of the communities that have built this nation," said Jealous. "America led the world in innovation and job creation in the last century; we can do it again in this century if we have all hands on deck working together. As leaders from the business and military communities have affirmed, for our country to have the best leaders tomorrow, we must ensure that all universities are opened to every community today."

Before the selection of President Barack Obama or Republican presidential candidate Mitt Romney, America might have to deal with another bombshell if Roberts and Alito have their way.