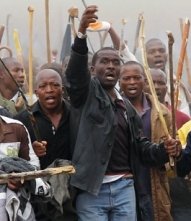 "It has made progress," began the story sub-titled "Cry, the Beloved Country." "But South Africa is now going backwards." A hodgepodge of new and old problems were blamed, including unemployment, inequality, education and ineffective leaders.

"It's an easy kind of journalism," observed Reg Rumney in the South African Mail and Guardian. "Make up your mind about the story and then find the facts to fit."

Cry the Beloved Country, written in 1948 by South African author Alan Paton, highlighted the early roots of the racist system of apartheid.

"The Economist story was superficial, but then, much of the West's perception of South Africa is superficial," media commentator Wessel van Rensburg wrote.

"The Economist's assessment is quite right, yes," Wadim Schreiner of Media Tenor South Africa argues, but adds, "It misses some context and, like some other assessments of South Africa, it also ignores many positive developments."

The country's presidency called the article "grossly incorrect" to suggest that South Africa is on a downhill slide. "While the country may have received a downgrade from two rating agencies, so have many other countries even in Europe and elsewhere," said Mac Maharaj, speaking for President Zuma.

The South African "Daily Maverick" weighed in: "In its scathing assessment of South Africa, The Economist falls back on tired tropes about the 'nature' of Africans. What's worse, the images it chooses to illustrate its stories reinforce stereotypes and affect how we view ourselves.

Nigerian novelist Ben Okri, in a speech last month at the Steve Biko Memorial Lecture, spoke of the existence of three different Africas: "The one that we see every day, the one that they (gesturing with a side movement of his thumb) write about and the real, magical Africa that we don't see, unfolding through all the difficulties of our time like a quiet mirror."

"it is the portrayal of South Africa in these articles (in The Economist), the careful process of selection and combination enacted by their authors and editors, that is retrogressive - the latest afropessimistic artifact in a long line of misrepresentation," the Daily Maverick editorial observed.