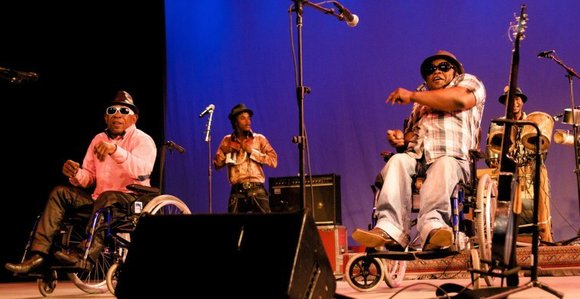 The lead-in to the concert started outside of the Peter Norton Symphony Space as several members of the renowned Congolese band Staff Benda Bilili rolled up in front of 2537 Broadway at 95th Street and immediately began to engage their fans in amicable conversation, speaking in French. Seated in wheelchairs, smoking cigarettes, were musicians Ricky Likabu Makodu, Coco Yakala Ngambali, Theo Nzonza Nsituvuidi and Djunana Tange-Suele.

Like inquisitive learners, they asked questions as they mingled with their devotees, who were anxiously waiting for the Thursday, Oct. 18, performance to get under way for the World Music Institute's presentation of Staff Benda Bilili's debut engagement in New York City.

A short time later, the scene shifted indoors as the packed venue warmly greeted the eight-member group on to the stage. Forming the front line were Ngambali, Makodu, Nsituvuidi, Tanga-Suele (vocals) and Kabamba Kabose Kasungo (vocals). Providing the back line were Roger Landu, Paulin "Cavalier' Kiara-Maigi and drummer Montana Kinunu Ntunu. All the artists were masters in delivering the rich, infectious harmonies that made the evening a resounding hit.

What unfolded for the next 90 minutes was an incredibly entertaining, cultural, enlightening and skillfully orchestrated evening. The message was in Staff Benda Bilili's music of power and splendor, where the steady pulse of the Congolese rumba rode alongside the dynamic voices of these gifted street musicians.

The upbeat, wide-ranging program, which consisted of 13 numbers, all sung in Congolese, was truly inspirational. The band never let up. There was invigorating singing, nonstop dancing and movement of the paraplegic artists in their wheelchairs as well as on crutches, and from the three non-handicapped artists. There were also unique instruments such as Landu's one-string tin-can-guitar (satonge), and Ngambali's specially designed guitar. All of this added up to a high-energy performance that not only entertained but also educated concert-goers, who were able to understand the gist of the songs from notes provided in the evening's program.

The ballad "Moto Moindo" ("Black Man"), composed by Kiara-Maigi, with Makodu, Ngambali and Kasungo on vocals, urges Africans to "stand up and repossess their own resources after years of postcolonial dependency."

The variety and scope of songs offered during the course of the evening reflected why Staff Benda Bilili is considered the genuine journalists of their hometown, Kinshasa, the capital of the Democratic Republic of the Congo. Their songs offered a commentary about everyday events in their country.

"Bilanga" ("The Field"), composed by Kiara-Maigi, addresses the hardship of city life as compared to living in the villages, "where we've got everything we need. All you've got to do is to cultivate the land." Another song, "Kuluna" ("Gangs"), composed by Ngambali, on lead vocals with Landu, focuses on the importance of not getting involved in gangs, but honoring the elders by following their advice to live a moral life.

One of the primary messages conveyed by the group is "that the only real handicaps are not in the body, but in the mind." On "Mutu Esalaka" ("The Brains Are OK"), composed by Makodu, the lyrics inform us that "my head and my eyes work very well, my handicap doesn't stop me from being clever. It's not my handicap that will hold me back, I travel all over the world because I use my brains."

This theme has played out in the lives of this band, whose members have performed in Europe, Asia and Australia and now New York City, where the cheering, dancing, grinning audience would not let Staff Benda Bilili leave the site until they returned to the stage to perform "Souci" ("Worries"). Looking at the happy, smiling faces, whatever worries that may have been brought into the venue had long been forgotten, thanks to the masterful artistry and positive energy of Staff Benda Bilili, who had turned Symphony Space into a soulful, funky Broadway.