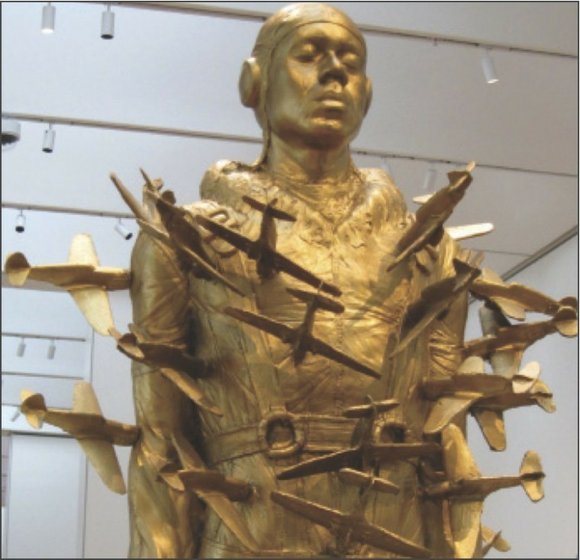 As the country remembers 9/11, most are recalling stories from that day, writing on blogs and telling friends over dinner exactly where they were and what they felt on that day so long ago. But one Black artist's story has already been told, in various art museums across the country, over the last 10 years.

On Sept. 11, 2001 37-year-old Michael Richards was the artist in residence for World Views, the Lower Manhattan Cultural Council's residency program in the World Trade Center. Richards was in his studio on the 92nd floor of the South Tower of the World Trade Center when the first hijacked plane hit the building. He is thought to have been killed on impact, and his final works of art were lost when the building collapsed.

Just two years earlier, in 1999, Richards was working on a series of sculptures about the Tuskegee Airmen. Drawing inspiration from the nail sculptures from the Congo, Richards had created "Tar Baby vs. St. Sebastian" and various other sculptures of himself being struck with airplanes. His gold-painted airmen, prophetic depictions of himself, have now become an eerie symbol of those lost in the terrorist attacks on the World Trade Center.

Richards depicted a Black serviceman as Saint Sebastian, the early Christian martyr executed by being shot full of arrows, showing an airman pierced by World War II fighter planes. Sharon Pendana wrote, in an op-ed for the Root:

"Before his death, Richards' work was becoming recognized in larger art circles and his career was poised to take off."

"Michael Richards was a 37-year-old African-American artist who explored his people's history and identity through sculpture, conceptual art and installation pieces," wrote Mark Vallen in an essay in 2001 after Richards' death.

Born in New York City and raised in Jamaica, Richards used many African and African-American symbols in his work and became closely tied to the Black communities in Harlem and Queens after he returned to live in New York and attend Queens College.

His life and work were celebrated with a memorial service held at the Studio Museum in Harlem on 125th Street in 2001. More recently, "Tar Baby vs. St. Sebastian" was on display at the North Carolina Museum of Art in Raleigh.

"It was like seeing a ghost," said Eleanor Magid, a former professor of Richards' at Queens College. "The piece speaks to 9/11 so strongly. I think this Michael Richards piece is our 'Guernica,'" she said, referring to Pablo Picasso's painting of the bombing of Guernica in Spain in the 1930s.

This month, the Brooklyn Museum opened a show on Sept. 7 entitled, "Ten Years Later: Ground Zero Remembered." The show remembers 9/11 by displaying one of Richard's Tuskegee airman sculptures, which displays nails piercing a man's body, along with other 9/11-related works.