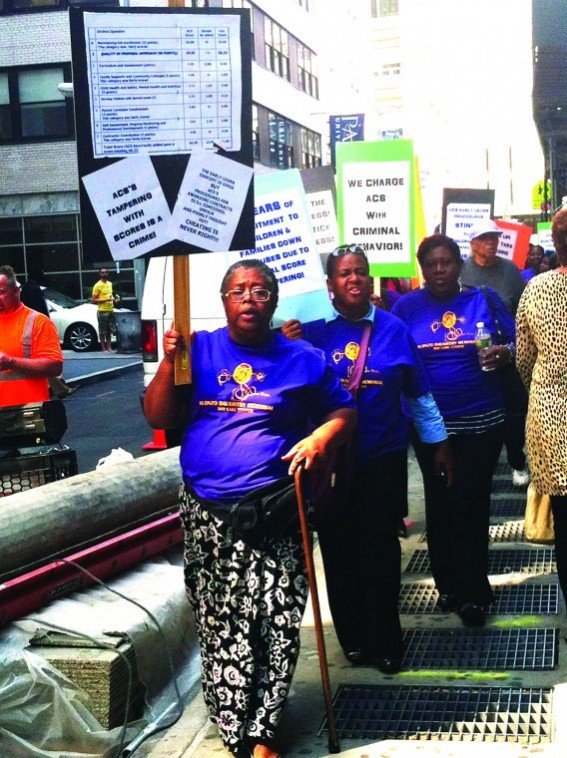 "We charge ACS with criminal behavior."

On Monday, a group of protesters picketed on Fulton Street in downtown Manhattan against what they are calling the illegal practices of the New York City Administration for Children's Services (ACS) in closing several day care centers across the city, including the Alonzo Daughtry Memorial Day Care Center in Brooklyn.

ACS is a city agency that protects New York City's children from abuse and neglect. "Along with our community partners, Children's Services provides neighborhood-based services to help ensure children grow up in safe, permanent homes with strong families," reads the ACS website.

However, ACS is also in charge of approving day care contract applications, and earlier this year the agency eliminated dozens of child care providers' contracts in order to instate EarlyLearn NYC, "the city's new education model that will merge child care and early education into a single, seamless system and establish a foundation for success for the city's neediest children," according to the ACS website.

The problem is that many of the rejected contracts are from small businesses providing a much-needed service in close-knit neighborhoods. Among the protesters were the Rev. Hebert Daughtry and his wife, who said the ACS's new campaign is closing many of the Black-owned day cares in the city.

In August, parents and day care providers protested at a public hearing and spoke out about the changes in the city's day care plan.

"We've won three awards for our performance," said Beverly Campbell, of the Afro-American Parents Educational Centers, to the New York World at the protest in August. "We took over three failing day care centers and brought them to excellence. But on our [application], we still didn't qualify."

Protesters in support of Alonzo Daughtry Memorial Day Care Center, which has also won various awards but did not have its contract approved this year, accused ACS of tampering with the scores of some day cares to make it appear that they were underperforming.

ACS did not respond by press time with comment, and the Alonzo Daughtry protesters plan to continue their picket for three days.