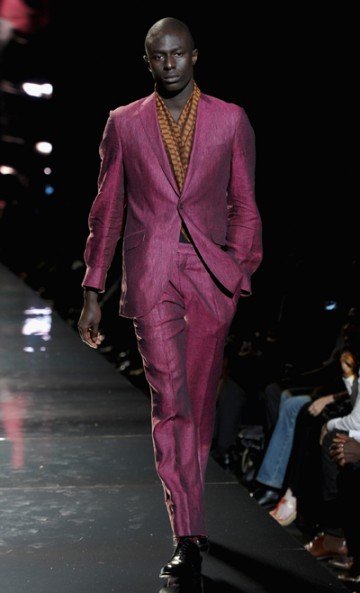 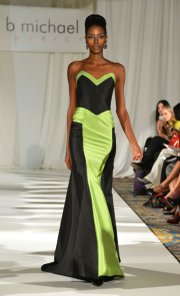 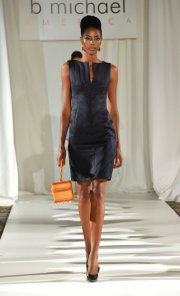 Right from the start, b Michael's spring 2013 collection had the audience on the edge of their seats. His attention to detail and his shapes are superb. Fated to become a fashion designer, Michael grew up in Durham, Conn. He found his early inspiration in his mother, who passed her creativity and keen sense of style onto her son, and in family extending back four generations. For this collection, b Michael incorporates the fantastic with understated cool, sensational color with elegance and emotion with design. His show at Mercedes Benz Fashion Week at Lincoln Center was simply couture-like. He is one of the best fashion designers of these times.

A graduate of the University of Connecticut and a former account executive for a Wall Street firm, b Michael decided to pursue his creative side. After his successful stints designing for Oscar de la Renta and Louis Feraud, he launched a successful millinery line. With the help of Eleanor Lambert, the designer debuted his first couture collection in 1999. His designs exuded a glamorous yet clean aesthetic. B Michael's juxtaposition of creativity with simplicity is exemplified by the kaleidoscope dress from his 2004 collection that was sewn together from 14 fabrics, consisting of 50 pieces. He has shown his collection in Beijing, Shanghai and Korea.

B Michael, an African-American, heightens his couture aesthetic by infusing emotions such as joy into his designs, adding a discernible feeling and festive mood to his creations.

Describing his style, b Michael says, "It's a modern approach to glamour. It is also about achieving a very sophisticated, yet simplistic look. A woman who wears b Michael knows how to wear a basic dress and make it look glamorous." His collections have garnered fans such as Cicely Tyson, Nancy Wilson, Beyonce, Lena Horne and Angela Bassett.

His designs have been featured editorially on Halle Berry and sisters Serena and Venus Williams. However, the designer is not just a 9-to-5 whiz, he's a consummate entertainer with a collection of vintage books, artifacts and photography displayed throughout his home. His dinner parties are often the talk of the town, from engaging conversations to the setting of floral arrangements. You may often find him at some of New York's trendiest spots.

In 1998, b Michael became a member of the CFDA, an organization that's known to recognize America's leading fashion and accessory designers. Always willing to take on new challenges, he is a guest lecturer in New York's Fashion Institute of Technology, and he serves on several charitable advisory boards. Good Show!