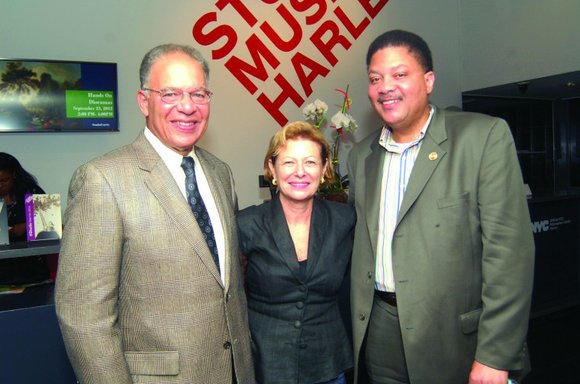 The Studio Museum in Harlem held a special tribute to the renowned African-American documentary filmmaker Bill Miles. Miles was unable to attend, but he sent his wife, Gloria, and daughter and son-in-law, who received his awards on his behalf.

Miles was born and raised in Harlem on 126th Street directly behind the Apollo Theater, a short distance from the Studio Museum. His love for filmmaking and his intuitive and fastidious personality shaped his documentary film career as an adult. Some of his most prestigious films are "I Remember Harlem," "Men of Bronze," "Black Astronaut," "Black Cowboy" and many more over a period of 40 years.

The evening began with a cocktail reception in the museum lobby, a gallery viewing of an exhibition now on display at the museum, the program in the museum theater with Erin Gilbert of the Studio Museum and master of ceremonies Leon T. Goodman. The program featured Nina Rosenblum, an Oscar-nominated, two-time IDA Award-winning producer, director and writer of documentaries, shorts and segments and the president of Daedalus Productions, and also Gloria Miles and family.