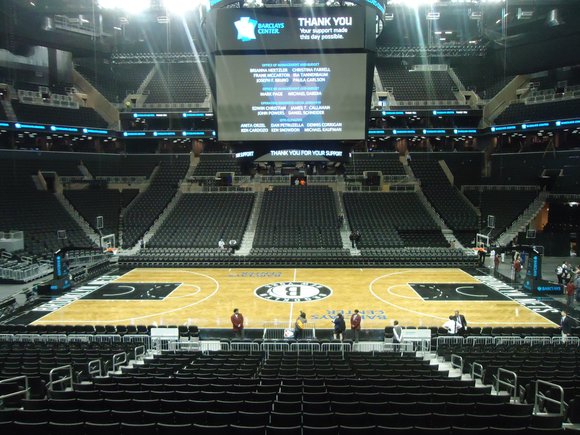 An ominous rally is scheduled for the Friday, Sept. 28, opening of the new Barclays Arena, the Jay-Z-co-sponsored home of the Brooklyn Nets. Activists under the umbrella name S.A.V.E. (Support Anti-Violence Efforts) America Coalition are using the opening to highlight the year of extreme gun violence in the inner city. They plan to bring dozens of caskets outside the arena to make their point.

"This is not a rally against Jay-Z or even the arena," said Andre T. Mitchell, founder and executive director of Man Up! Inc. and national chairman of the S.A.V.E. America Initiative.

"This is a rally to bring attention to the increasing gun violence in the urban areas. We are using this high profile event--the opening of this massive stadium in downtown Brooklyn--to make a humble plea to those in the hip-hop community and industry to help us challenge the pandemic and national health crisis that is gun violence in the inner city."

The caskets? Mitchell said, "Our traditional trademark 'Processional of Caskets' symbolizes lives lost in each borough of this city. Our coalition has used this symbolism before, for example, at the National Day of Outrage at Times Square in 2009; the Tsunami of Peace at City Hall in 2010; and the Brownsville Occupy Movement at Wall Street in 2011. Now in 2012, we must take it to the streets once again and resurrect the spirit of commitment to end senseless violence.

"We will continue to demonstrate until this epidemic of violence is addressed holistically through immediate economic justice, innovative health care methods and real neighborhood empowerment for marginalized communities throughout this city. Violence is a disease, and it must first be properly diagnosed as such and then effectively treated and cured!"

Mitchell added that there would be a new twist, however, stating that the whole move was to see in Brooklyn the Resurrection of Peace 2012. "This time we are invoking the symbolism of the Underground Railroad by utilizing our underground rail system, New York City's mass transit subway system," he said.

Mitchell told the AmNews that the coalition plans to take several caskets on the subway to the arena as tens of thousands of concertgoers stream to the Barclays Center to catch one of Jay-Z's shows.

"We have to remember that in many discounted neighborhoods throughout this city, hundreds of family members still mourn their loved ones," said Mitchell.

Mitchell said that this an action with citywide support from a number of grassroots groups making up the S.A.V.E. America Initiative, including Man Up! Inc., I Love My Life, SOS Crown Heights, CeaseFire Chicago, Don't Shoot NYC, King of Kings Foundation and the Feurtado brothers and Not Another Child.

Stressing repeatedly that this was not an action against the hip-hop icon, Mitchell stated, "We want there to be a concerted effort with industry figures like Jay-Z to work with us and to become those Ambassadors of Peace who will help us keep the youth out of this violence that is destroying our communities."