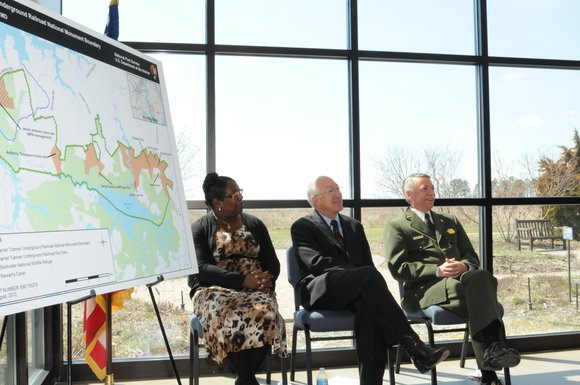 While you may no longer be able to tour the White House due to the sequestration, President Obama has established a new national monument to commemorate the life of an important figure in African-American history: Harriet Tubman. This new landmark will be sure to draw additional tourists to the D.C. area.

"Harriet Tubman's selfless commitment to fight for the freedom of those unjustly held in bondage and seeking justice and civil rights for all Americans is an important chapter in the story of our country," Salazar said in a statement.

Tubman returned several times to the very site where the monument will be established to lead slaves to freedom through the Underground Railroad. Known as "the Moses of her people," she fled her own enslavement in Maryland when she was 27 and ventured north through Maryland's Eastern Shore. Before her death in 1913, she was a spy for the Union during the Civil War and became deeply involved in the women's suffrage movement.

The monument, scheduled to open in 2015, will include landscapes that are "significant to Tubman's life as an enslaved person and conductor of the Underground Railroad," according to a statement.

One of these landscapes is the home of Jacob Jackson, a free black man who helped Tubman communicate with her family and others through the use of coded letters. The Jacob Jackson Home Site was donated by the Conservation Fund for inclusion in the new national monument.

While the new monument, one of five established by President Obama last week, is primarily meant to acknowledge Tubman's accomplishments, it will also bring in tourist revenue, according to Salazar.

"The monument will not only remind us that a single courageous person can achieve extraordinary gains for humanity, but it will also create jobs and boost the local economy through increased tourism," Salazar said in a statement.

For additional information about the upcoming park, visit www.npr.gov/hatu.