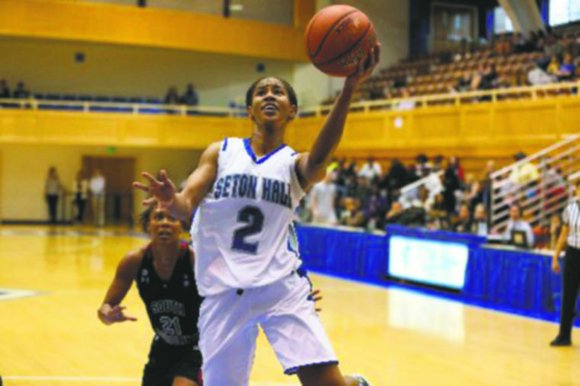 This weekend, the best Division I women's basketball players are gathering in New Orleans for the Final Four. Unfortunately, no local teams are in the mix, but two players from schools in New York and New Jersey will be in attendance as participants in the Women's Basketball Coaches Association's 11th annual "So You Want to Be a Coach" program.

Krystal Wells of Long Island University (LIU) and Brittany Morris of Seton Hall University were chosen from hundreds of applicants to participate in the three-day workshop, where the aspiring coaches learn about recruiting, administration, how to get hired, skill development, the importance of knowing the rules and how to balance work and life.

"Since I was a little girl, I've thought about coaching," said Morris, a sports management and marketing major. Several of her friends were also nominated by their head coaches, but she was the only one selected for the prestigious program. She's looking forward to meeting coaches like Penn State's Coquese Washington and Duke's Joanne P. McCallie.

"Getting to hear their philosophy and being helped by them is extremely exciting," said Morris.

Wells, a business management and marketing major who completed her bachelor's degree at LIU in January and who has begun coursework for an MBA, said she sees coaching as the next logical step in a life spent in and around basketball.

"I want to meet coaches from the more competitive conferences to see what it took to play for them," Wells said. "What could I have done better to be a part of a bigger conference? When I become a coach, what can I learn to draw players to my program?"

For the past three years, Morris has played for one of the best coaches in the women's game, Anne Donovan.

"Building a program isn't easy, and she's definitely taken the time every year to build it piece by piece," Morris noted. "I've learned to always have that passion when you coach, always have that competitive edge no matter what."

Wells, who was born and raised in Southern California and then attended high school in Georgia before coming to LIU, said she's willing to go anywhere to begin her coaching career. She's taking 100 resumes with her to New Orleans.

"You have to be willing to move to follow your dreams," she said. "I'm young, I can do that."