Malcolm in the muddle : State senator arrested in corruption scandal 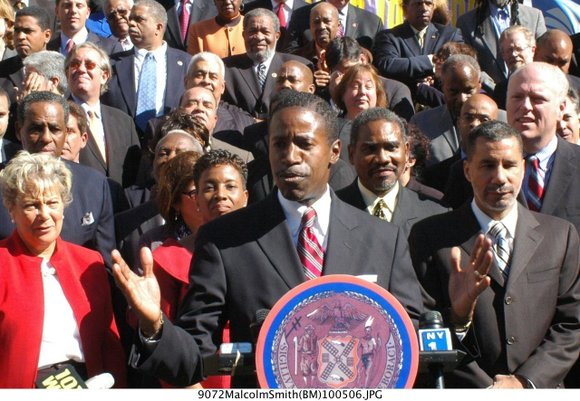 Malcolm in the muddle : State senator arrested in corruption scandal

On March 28, New York state Sen. Malcolm Smith wrote on the social media site Twitter that "the theme of the week is 'Tell the truth.'" Maybe Smith knew what was coming a week later.

The 28-page FBI complaint detailed how, with Halloran as the go-between, the senator and the councilman allegedly colluded and conspired to help an FBI agent (posing as a wealthy real estate mogul) bribe GOP officials in Queens and the Bronx so that Smith could run for mayor of New York City on the Republican line. According to the federal report, Savino and Tabone were set to receive $40,000 in bribes if they could help Smith get on the ballot. For his work as the mediator, Halloran would've expected $20,500 in bribes.

Non-Republicans need three out of five borough party leaders to agree in order for them to have access to the GOP ballot line in the primary. Smith wanted to buy his way to the ballot, but up to this point he has never declared his candidacy for mayor. Smith was arraigned and released on bond later on Tuesday afternoon.

Smith helped connect Jasmin and Desmaret to the real estate agent, and they were paid $10,500 in bribes as part of a real estate deal toward which Smith promised to steer hundreds of thousands of dollars in state funding. Halloran allegedly made an agreement to steer $80,000 in city council discretionary funds to the FBI agent's fake real estate company in exchange for contributions to the councilman's 2012 campaign for congress.

During one taped conversation involving Halloran and Smith, the former bluntly stated how he felt politics worked in New York.

"You can't do anything without the f--g money," said Halloran. "Money is what greases the wheels--good, bad or indifferent."

"As alleged, Sen. Malcolm Smith tried to bribe his way to a shot at Gracie Mansion--Smith drew up the game plan and Councilman Halloran essentially quarterbacked that drive by finding party chairmen who were wide open to receiving bribes," said Bharara. "After the string of public corruption scandals that we have brought to light, many may rightly resign themselves to the sad truth that perhaps the most powerful special interest in politics is self-interest."

State Sen. Jeff Klein began the bloodletting by stripping Smith of his leadership position and committee assignments in the Independent Democratic Conference. In statement, Klein said, "These are very serious allegations that, if true, constitute a clear betrayal of the public trust." According to his Senate page, Smith is currently the vice chairman of the Senate Finance Committee, the chairman of the Independent Democratic Conference, the chair of the Senate Social Service Committee, the co-chair of the Budget Sub-Committee on Super Storm Sandy Recovery and the co-chair of the Senate Bipartisan Task Force on Hurricane Sandy Relief.

Former New York City Comptroller and New York City mayoral candidate Bill Thompson talked about a system that hasn't caught up to the needs and desires of the people of New York.

"These most recent developments are the latest in a history of corruption and a broken system that, despite claims to the contrary, has clearly not been adequately reformed under the Speaker's leadership. New Yorkers deserve a government as good as the people it represents." Thompson said that under his administration, there would be "zero tolerance" for violating the public trust.

As a result of the indictments, the Republican primary for New York City mayor looks more intriguing than it might have been previously. Prior to his arrest, Tabone worked for John Catsimatidis' campaign and Halloran had recently publicly endorsed former MTA Chairman Joe Lhota for mayor. Catsimatidis already went on record stating that he's cooperating with the investigation while Lhota's been busy attacking Council Speaker Christine Quinn for supporting an NYPD inspector general and attending the New York Yankee home opener with former mayor Rudy Giuliani.

"Today's charges demonstrate, once again, that a show-me-the-money culture seems to pervade every level of New York government," said Bharara. "The complaint describes an unappetizing smorgasbord of graft and greed involving six officials who together built a corridor of corruption stretching from Queens and the Bronx to Rockland County and all the way up to Albany itself."

Stating that corruption in state politics is pervasive might not be music to New York state Gov. Andrew Cuomo's ears. Cuomo, while speaking with WAMC Northeast Public Radio, expressed disappointment in the news of the scandal and hoped that all parties cooperate with the authorities.

"I'm sorry to hear that federal charges brought against Sen. Malcolm Smith. I am looking to see the outcome," Assemblywoman Inez Barron told the AmNews.

New York City Public Advocate and New York City mayoral candidate Bill de Blasio said, "Sadly, today's news is the latest in a long line of wrong and improper use of discretionary funds. To restore the public trust, we need a real investigation into this troubling pattern of abusing taxpayer dollars for political gain. It's time for real reform and transparency. We've heard reports that discretionary funds were used to punish council members for political purposes. We've even seen some council members go to jail for illegally using these funds.

"The system is clearly broken, and it's time for real reform," de Blasio said.

FBI New York Assistant Director George Venizelos also spoke of the people's trust in elected officials and stated that citizens of New York had a right to expect better from those in office.

"Elected officials are called public servants because they are supposed to serve the people," Venizelos. "Public service is not supposed to be a shortcut to self-enrichment. People in New York, in Spring Valley--in any city or town in this country--rightly expect their elected or appointed representatives to hold themselves to a higher standard. At the very least, public officials should obey the law.

"As alleged, these defendants did not obey the law; they broke the law and the public trust," Venizelos continued. "There is a price to pay for that kind of betrayal."

While Smith, Halloran and company might have betrayed the people, many New Yorkers have been cynical about local politics for a long time. What the FBI caught Halloran allegedly stating might drive that cynicism farther down the rabbit hole.

"That's politics, that's politics; it's all about how much," Halloran allegedly said on tape. "Not whether or will--it's about how much, and those are our politicians in New York, they're all like that ... And they get like that because of the drive that the money does for everything else."