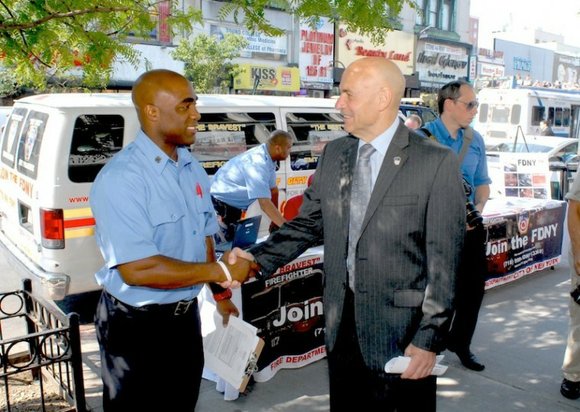 The FDNY's hiring process will be under the supervision of the federal court for the next decade, if not longer. Any changes made to any test given need to be approved by federal court before the next two firefighter exams.

Last week, the Center for Constitutional Rights (CCR) and the Vulcan Society won a four-year-old lawsuit against the FDNY. U.S. District Judge Nicholas Garaufis told reporters that the city needs "to comprehensively reassess its policies and practices, to analyze the evidence showing the effect of those policies and practices and to rationally consider how they can be changed to achieve a firefighter hiring process that is-in actual practice and effect-fair and open to all."

On Oct. 17, the judge will appoint a monitor to act as his representative to oversee all of the hiring practices for the next 10 years. The monitor will have the power to approve or reject policy changes.

According to court documents, "the underrepresentation of Blacks in the ranks of New York City firefighters is a vestige of the city's discrimination against Black firefighter candidates."

"We are very happy with the decision for a number of reasons. The judge agreed the Fire Department cannot be trusted to change on its own," noted CCR attorney Darius Charney. "It has proven, over the last 40 years, that it is unwilling to do what is necessary to end its discrimination and exclusion against applicants of color in the FDNY. We think that it was long overdue. It is time to hold FDNY's feet over the fire."

CCR, which represents the Vulcan Society, complained a decade ago, charging that the exam given to FDNY applicants was plagued with inadequate SAT-like questions.

"These are the kinds of decisions we saw in the '60s and the '70s in the South. When federal judges would basically tell racist states and Southern cities, 'Hey, look, you can't do this anymore,'" Charney added. "It is interesting to see this kind of decision in 2011. What it shows is that the FDNY's hiring practice is a relic of that time."

The court's decision was a slap in the face to the Bloomberg administration, which allowed the department to remain almost 97 percent white for decades, despite the fact that the city's population is approximately 25 percent Black.

Mayor Michael Bloomberg told the Associated Press that no previous administration had done more than his to attract diversity to the FDNY. "Our commissioners have worked ceaselessly [and] tirelessly to make sure that everybody, every community, knows what a great job this is, and tried to convince them to join the world's greatest fire department," Bloomberg said. "More than 61,000 people applied, half of them minorities, shattering any previous record for minority applicants."

In a city of 8 million, where more than half the population belongs to a racial or ethnic minority, only 9 percent of the 11,200 uniformed firefighters are Black or Hispanic.

Vulcan Society President John Coombs feels the ruling is a step in the right direction for the FDNY. "It's rewarding to know there was an effort made and it has now become a reality for more people in our communities," he said. "It is a great thing to know that people in our communities will still have some financial stability by way of employment in the Fire Department. My biggest concern is to see people of color as firefighters-then I will be elated."