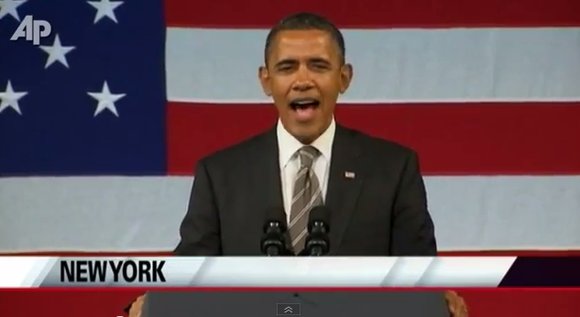 In his second visit to Harlem since being elected, President Barack Obama made his way back uptown last week for a fundraiser and concert at the Apollo Theater with singers India.Arie and the Rev. Al Green.

The commander in chief raked in a reported $3 million thanks to his evening in New York at the legendary theater after attending fundraisers at residences on the Upper East Side, including the home of director Spike Lee and his wife, Tonya.

While a viral video of Obama's short rendition of Green's "Let's Stay Together" appears to be the media highlight of his visit, the president received more favorable reviews from the community than during his last visit to Harlem in 2011.

Part of the public relations success of this visit to the "capital of Black America" can be attributed to the president singing a different tune this time-no pun intended-by making his Apollo fundraiser more accessible to the Black community and the less well-heeled. A limited number of $100, $200 and $300 tickets were available. Those who wanted to give more could pay up to $20,000 and receive a picture with Obama along with a VIP reception with performers and premium seating.

It was just last year that the president was highly criticized by some in the community for holding an over-$30,000-per-plate dinner at the Red Rooster followed by a soiree at the Studio Museum in Harlem, adding salt to the wounds. Both events saw few members of the Harlem establishment and a nearly 85 percent white audience.

Meanwhile, this year's event at the Apollo saw a full house with a more diverse number of people at the uptown event, and the president spoke about his vision if he is elected to a second term.

During his nearly 35-minute speech, the president touched on a range of issues, including health care, jobs, eliminating "Don't Ask, Don't Tell" and public education. He highlighted his achievements thus far in his first term and what he intends to do if elected to a second term.

"Now, I know these have been three tough years," Obama said. "I know that some of the change folks wanted hasn't come as fast as people hoped for. I know that after all the stuff that has gone on in Washington, it's tempting sometimes to just say, you know what, it's not possible; the system's broken; we give up. That's tempting. But remember what I used to say in the last campaign. I said this-I repeated it over and over again: Real change, big change-it's hard. It takes time. It takes more than a single term. It takes more than a single president."

"Obama coming to Harlem means that Jesse Jackson is right; hope is alive," Rangel said. "I just hope that while he's raising money during the campaign, he finds time for us."

Rangel said Obama will be spending time and money in places where he is not certain to win but needs to win, and he hopes that Obama will continue to make appearances in communities of color because "people's hope lies in his success."

Also sitting in the fifth row at the event was Wright, who said that Obama made his case and deserves four more years.

"People in Harlem have money like anywhere else. He made it very accessible-$100 is a small price to get an up close and personal view of history," said Wright.

Community organizer and Obama campaign volunteer Brian Benjamin was on hand and said, "I think the campaign was clear in saying that we need to raise the money. He really had to be focused on how do we raise money and do something more accessible? The $100 concert at the Apollo, that's really a good deal. They could have charged higher prices. It's not that people don't want to give, they just don't want to break their banks."

NAACP New York State Conference President and stalwart Black community activist Hazel Dukes was also in attendance at the fundraiser and said Obama was able to reach a wider audience this year-Dukes was not in attendance at last year's fte. She said the Apollo fundraiser gave Obama a greater opportunity to outline his plans for the nation, if he is indeed elected to another term. An outspoken supporter of the president, Dukes called his visit "historic," as he is the first sitting president to visit the Apollo.

"This was accessible and the price was right. It was the right thing to do at the right time," Dukes said. "It was a diverse group. It lifts the spirit when he gets out of his bubble and meets the people. We know what is happening in the body of politics and we understand he could not change everything he wanted to change."