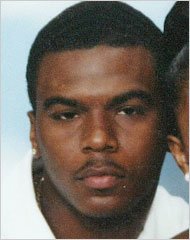 Two of the NYPD officers involved in the shooting death of Sean Bell are standing trial within the Police Department to determine if any disciplinary action should be taken against them. Detective Gescard Isnora and Officer Michael Carey could both lose their jobs if the department finds they violated NYPD guidelines.

The officers, along with three others, were acquitted of manslaughter charges in 2008 after killing Bell in 2006 in a barrage of 50 shots outside a club in Queens the day before his wedding. No weapon was found on Bell, and the officers claimed they opened fire when they thought Bell was going to run them over with his car.

The other officers who also fired shots, Detectives Michael Oliver, Marc Cooper and Paul Hedley, are reportedly trying to work out a deal with the NYPD to retire early and keep their pensions.

Also in the car that night were two of Bell's friends, Joseph Guzman and Trent Benefield. The officers testified during the 2008 bench trial that they fired because they heard one of the men say he was going to do a drive-by shooting of a man with whom he had got into an argument inside the club.

Reports indicate that NYPD's own lawyer, Adam Sheldon, stated on Monday that Bell's death was unjust. He reportedly said, "This was one of the most tragic police shootings in the history of this department."

Still involved is the Rev. Al Sharpton, who has been attending the departmental trial. He has played a large role in the case since Bell's death and has been credited with helping and advocating for the Bell family.