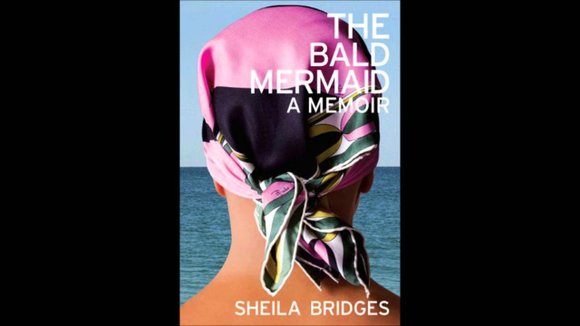 During your life, you live many lives. While reading “The Bald Mermaid: A Memoir” by Sheila Bridges (Pointed Leaf Press, September 2013), you will enjoy the journey of this author, who shares several of her life’s stories. It’s an inspirational memoir about a remarkable, talented woman. Folks were talking about it during last week’s Harlem Book Fair.

You’ll remember Bridges as the interior designer who designed the Harlem office space of Bill Clinton after his presidency at the Carver Building on West 125th Street. “The Bald Mermaid: A Memoir “ is her second book. With engaging and personal vignettes, this book explores her questions of identity, femininity, race and success. Bridges, who holds degrees from two prestigious universities, has a successful career in interior design. She creates homes for high-profile clients and also hosted her own TV show. She writes about what it felt like to have it all and then feel that she’d lost it all after a bout with alopecia, which caused her to lose her hair. There are emotional, tear-filled moments in this book, even for the reader. However, her strength from within pulls her through. Bridges explains how she ultimately found balance and peace in her life.

In “Bald Mermaid,” Bridges comes to terms with what real success and happiness mean to her. She realizes the cost of independence and understands what it means to stay true to herself. She faces judgement and criticism and deals with the expectations of family, friends, lovers and strangers. You will smile while reading this book, gain hope and know that all will never be lost as long as you stay true to yourself and stay strong.

In stories that travel from Philadelphia to Harlem and her many beautiful spaces in between, Bridges courageously shares her successes and challenges in this refreshingly frank and elegantly illustrated memoir. “‘The Bald Mermaid’ is crafted with the same care and attention to detail Sheila gives her exceptional design work,” said Clinton.

“‘The Bald Mermaid’ is a brilliant, visually dynamic, humorous and heart-felt memoir. As a woman of color, Sheila is a pioneer, struggling with race and heart assumptions, yet always perservering through life’s battles. I laughed, I cried, I nodded through every chapter. Brava, Sheila! Always a class act,” said actress Vanessa Williams.

Named “America’s Best Interior Designer” by CNN and Time magazine, Bridges founded her own New York interior design firm in 1994. She lives and works in Harlem. She has also been a regular contributor on NBC’s “Today” show, hosted her own cable network television show, appeared on “Oprah” and has been profiled in numerous national and international publications. “The Bald Mermaid” is a great book to read while relaxing this summer on the beach, in the city or in the country.