Brooklyn statue of Jackie Robinson gets vandalized with racial slurs 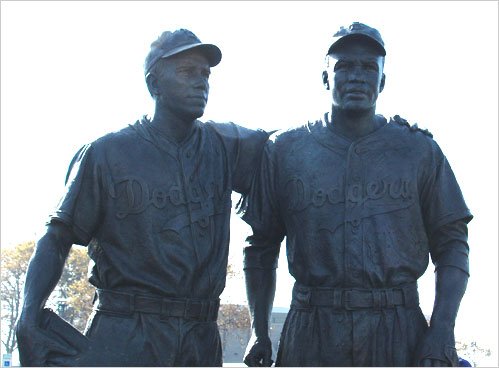 Nearly four months after "42", a biopic of Jackie Robinson was released, vandals marked a statue of Robinson with racial slurs and anti-semantic comments such as "Die N----r", "F--k Jackie Robinson and all n-----s" and "Heil Hitler". A swastika, a symbol used by Nazis in World War II, was also placed on the statue that sits outside Cyclone Park. "42" depicted how Robinson overcame racial tension as the first African American to integrate into the Major League Baseball League as a Brooklyn Dodger. However, it seems that even after his death, Robinson still faces racism.

According to a New York City Police Department spokesman, the statue was defaced with a black marker sometime between the end of the Cyclones baseball game Tuesday night and 7 a.m. on Wednesday

"Immediately we went into action to try and clean it and remove the graffiti," Bill Harner, a spokesman for the Cyclones, told News One.

Harner also said that there is video surveillance of the area.

"We're looking at the tapes to investigate exactly what took place," he said.

Employees for the New York City Parks Department have successfully removed the graffiti from the metallic statue but could not completely remove it from the stone base. As a temporary fix, they covered up what could not be removed with duct tape.

"This is being treated as a bias crime," said detective John Nevandro of the 60th precinct in Coney Island in a statement. "Hate Crimes will investigate the incident."

“This city doesn’t belong to whoever committed this act of hate. They will be caught. But Jackie Robinson’s legacy lives on in all of us. We’ll fight to preserve it in the face of bigotry and racism. I commend the NYPD for investigating swiftly so we can apprehend the perpetrators before they spread more hate in our communities,” stated Bill de Blasio, the current New York City Public Advocate and mayoral candidate of New York City.

The statue shows a real moment in history, when Pee Wee Reese, a white Dodger player at the same time with his arm around Robinson to show solidarity. The moment, which happened at Cincinnati's Crosley Field, was recreated in the movie"42" as well.