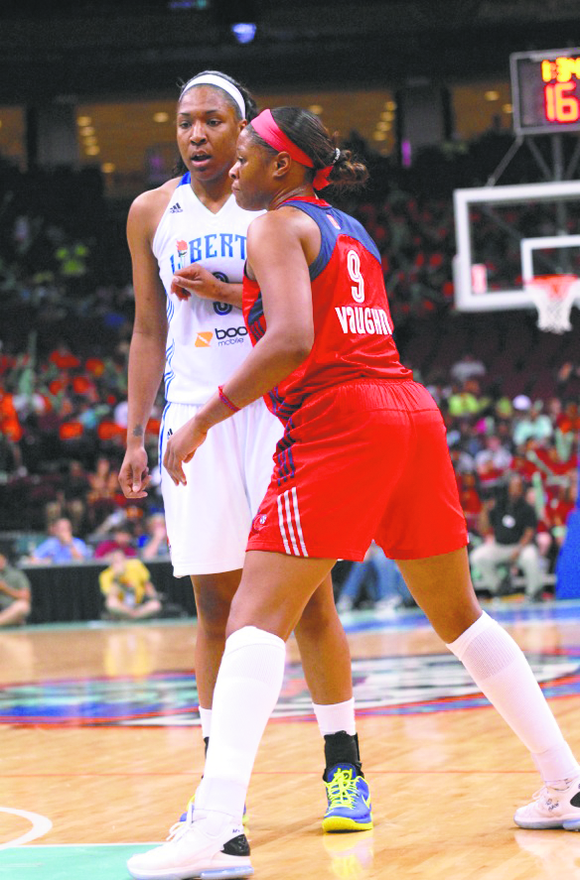 The heart is there, but the New York Liberty are still struggling offensively. A home court 88-66 loss to the Connecticut Sun last Saturday evening kept the Liberty in fifth place in the Eastern Conference.

“So far, it’s been rough. We haven’t really got a good push with the offensive game. Our defense is there,” said Liberty guard-forward Alex Montgomery. “We win some games, we lose some games. We’ve just got to stick together.”

The players appreciate coach Bill Laimbeer’s wisdom. The vets and rookies are trying to find the right team chemistry and push for a playoff run. Despite disappointments, they’re staying positive and moving forward. Veteran guard-forward Katie Smith, who has seen highs and lows in her WNBA career—two WNBA championships with the Detroit Shock and several disappointing seasons with the Minnesota Lynx—is spending her final WNBA season sharing her insights with her teammates.

“I’m learning a lot [from Katie]. To have a good mindset and to actually know the game when I’m out on the floor, think before I do stuff, always stay aggressive. She’s a great teacher on and off the court,” said Montgomery. “She’s always positive and she always wants to be better. [She] doesn’t make the same mistake twice.”

In her third year in the league, Montgomery, a graduate of Georgia Tech, sees her professional game continuing to evolve. Her defense is strong and she is trying to be more aggressive on the offensive end. She plays overseas each offseason to keep building her skills.

The Liberty take on the Los Angeles Sparks at the Prudential Center on Saturday afternoon. To keep pace with the Sparks and its star Candace Parker, who is having an MVP-quality season, the Liberty need to step up the offense.

“Getting our key players open, knocking down shots,” said Montgomery. “We’ll stick together. Right now it’s not there, but eventually we’ll get it. We need to find our chemistry. Once we get rolling, it will be smooth.”