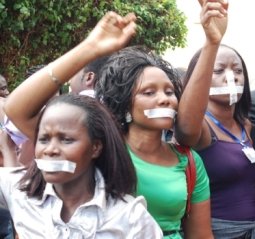 The law gives the police powers to control public meetings, including the use of force to break up gatherings held without prior authorization. Even meetings of a political nature held between three people must be authorized by the police, according to the law.

Activists who tried to defeat the bill in court note that the country's constitution guarantees the right to hold peaceful gatherings.

The bill was passed amid a crackdown against street protesters in the capital, Kampala, where the security forces routinely use tear gas and live ammunition to disperse opposition supporters.

Maria Burnett, a senior researcher with Human Rights Watch, called the law a "devastating" attack on freedom of expression and assembly."

Meanwhile, in a demonstration pre-cleared with police, Uganda’s beleaguered gay community held its second annual Gay Pride parade on the shores of Lake Victoria in the city of Entebbe.

Part of a weekend-long event, there were film screenings, a fashion show in drag, and all-night (and into the morning) parties. Two hundred and fifty tickets were sold but only about 50 showed up due to fear.

Uganda is among the most homophobic and anti-gay of its neighbor countries. An Anti-Homosexuality Bill not only targets gays and lesbians but holds a three-year jail sentence for anyone who fails to tell authorities, within 24 hours, that someone they know is gay. That obligates teachers, landlords, friends and relatives.

The bill, introduced in 2011, expired without a vote but was reintroduced in November 2012 although it has not yet come up for a vote and there are signs that it may not.

Activist Frank Mugisha, who appeared dressed in a sailor’s costume with a rainbow sash and called himself Captain Pride, said, “I just wish I had a switch that would make everyone who’s gay say they are gay. Then everyone who is homophobic can realize their brothers, their sisters, and their aunts are gay.” He confessed that he was shocked to see so many people in attendance.

One participant, Ambrose, who was in charge of selling Pride-themed T-shirts, explained that the dynamics of being gay in Uganda have changed: “This is who we are. We are here to stay. And we are not going anywhere.” w/pix of Ugandans protesting curbs on free speech