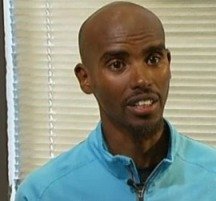 Aug. 6 (GIN) – Olympic and world champion runner Mo Farah has joined the campaign to preserve critical money transfer companies now threatened by big banks which plan to end the service to poor nations such as Somalia.

Mo Farah said the decision by the British bank Barclays could mean life or death to millions of Somalis. Many U.S. banks have already ended the service, citing heavy U.S. Treasury fines if wired money falls into the the hands of the Somali insurgency.

The looming cutoff is expected to occur next Saturday. It comes at a time when more and more Somalis have returned from abroad to invest in their home country, build new businesses and jump-start the nation’s economy after years of chaos.

Farah's native Somalia has no regulated banking system and gets 50% of its income through remittances.

This weekend Farah added his name to a petition calling on the bank to extend its deadline of Aug. 12 and asked his 800,000 Twitter followers to do the same.

Rushana Ali, shadow MP, said: "Countries across Africa and Asia will be badly affected and none more so than Somalia, a population reliant on what their friends and families send. Barclays's decision will indeed cost lives – quite apart from potentially triggering a new crisis in the region.”

Somali migrants send home approximately $1.3 billion in remittances each year -- more than Somalia receives in humanitarian assistance, development assistance and foreign direct investment combined. About 20 percent of the total comes from Somalis based in the United States, who send approximately $214 million -- almost the equivalent of one year of U.S. foreign assistance to Somalia -- to families and friends each year. w/ pix of M. Farah