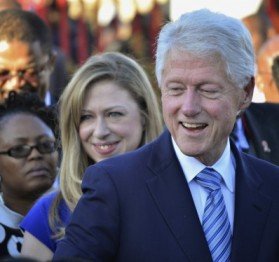 Aug. 13 (GIN) – Former President Bill Clinton, on an African tour with daughter Chelsea, praised the Rwandan government lead by President Paul Kagame despite increasing evidence that Rwanda is backing ruthless rebels in the neighboring Democratic Republic of the Congo.

A feisty Clinton, in an extended interview with the BBC, barely contained himself when reminded that human rights advocates, the U.N. and even President Obama have linked Kagame to the M23 rebel group which reportedly employs child soldiers and uses “terrible acts of violence,” according to the U.S. Treasury which has placed sanctions on group members.

“Where were those human rights groups criticizing” Rwanda today when Hutus were slaughtering Tutsis, Clinton asked BBC reporter Komla Dumor of Ghana. “…where were they when the Hutus went crazy in 1994?” To which Dumor responded: “Where was the world?”

Allegations of Rwanda’s support for M23 rebels in DRC, stated Clinton, “has not been fully litigated.” He added: “Secondly, its complicated by the fact that this section of Congo near Rwanda is full of people who perpetrated the genocide, who spurned the President’s offer to come home and not go to prison…and you can’t get around the fact that the economic and social gains in Rwanda have been nothing short of astonishing under Kagame, and he says he going to leave when his time is up…”

In addition to support for M23, Dumor said, there’s repression of media and other human rights abuses.

A laughing Clinton said: “Look, I believe in a free press. When I was President, I helped to keep the press free that made a living out of feasting on my bones everyday! And I think too many politicians are too sensitive to being criticized.

“I think we have to be a little sensitive to the fact that if you’re Rwandan, you remember that an alleged free press helped push Rwanda into a boiling cauldron of butchery…”

The Clintons’ tour took them to Malawi, Zambia, Tanzania, Rwanda and South Africa where they pumped up support for the Coca Cola Company’s Clinton Global Initiative Commitment which focuses on retail entrepreneurship for women.