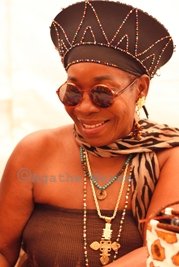 Aug. 13 (GIN) – Rita Marley, wife of reggae artist Bob Marley and founder of the Rita Marley Foundation, has received a Ghanaian passport in recognition of her contributions to Ghana.

Dr Erieka Bennett, head of mission for the African Union’s Diaspora Africa Forum, said: “We are thrilled to see the Ghana Government recognizing the tremendous contribution Nana Rita has made to Ghana socially, as well as economically. This is a historical day for those of us from the diaspora.”

Nana Rita Marley, born in Cuba and raised in Trenchtown, Jamaica, began her musical career in the early sixties as a vocalist with the all-female group The Soulettes who appeared with the Four Tops, Johnny Nash and other stars of the day.

She repatriated to Ghana over a decade ago and lives at Konkonduru, a village near Aburi. Among her projects, as detailed on the website “It’s About Time,” has been the adoption of the Methodist Local Primary and J.S.S, both schools in her community. Apart from rehabilitating old school blocks and building new ones, she also supports the children by providing lunches for primary school children to supplement their nutrition, and through scholarships.

Mrs. Marley supported the funding and distribution of the five-in-one vaccine for children of the eastern region. Other projects include improving the main road for the Konkonnuru community, and bringing water to the village by drilling a 40 meter deep borehole.

In 2004, Rita Marley and the women in her community began a plantation of cassava and other vegetables. Mrs. Marley has also opened a library stocked with the musical works of Bob Marley and herself at her Tuff Gong Studio at Aburi on the Akwapem ridge.

On her official website she notes, “Reggae is the heartbeat of a person. It’s the people’s music. Everywhere you go, you get the same response from both black and white.”