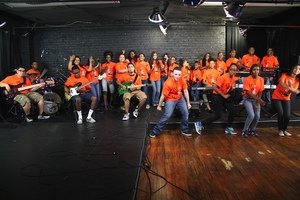 Members of the Music With A Message youth band.

The Music With A Message (MWAM) youth band will return from a summer tour this Friday for their second annual concert in the Bronx.

The MWAM band, a project associated with the Renaissance Youth Center, a South Bronx non-profit organization, features 30 artists ranging from ages six to 21 who make music with positive messages. The band will perform several tracks from their debut album, released this year, that deal with heavy topics including gun violence.

This summer, the band traveled to perform in different states like Maine, where they did a one-week tour to different parts of the state, and a close-to-home performance at Orchard Beach, in the Bronx, alongside radio station “La Mega” 96.9. However, executive assistant at the Renaissance Youth Center, Avery Watson, said the annual concert is the most important for the band members.

“Being that we’re on tour and family cannot come to every show, this is the day for their family, friends and other professionals that they are trying to showcase their skills to come and see and enjoy,” Watson said.

At the concert, members, who vow to “change their community one song at a time” will also use music as a platform to give their neighborhood positive messages. According to Watson, one of the band’s hits that discusses why young men should stop sagging their pants, titled “Pull Your Pants Up,” was named the “anthem of the Bronx” by Bronx borough president Ruben Diaz Jr.

“It’s important for them [band members] to get a positive message out to the urban community in a way that’s relatable,” Watson said. “It’s important to keep the community happy and understanding what is important in life.”