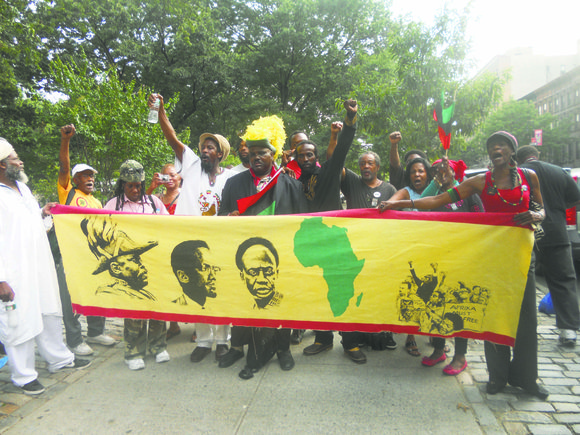 A contingent of modern-day Garveyites assembled Saturday evening, Aug. 17, on the corner of 124th Street and Mount Morris Park West as they acknowledged the achievements of one of Pan-Africanism’s forefathers on the 126th anniversary of his physical birth.

“This is the 72nd annual Marcus Garvey Day Parade, founded in 1941 by the honorable Carlos A. Cooks,” announced Brother Oba prior to the parade departing. “He was a spiritual son to Garvey. After Garvey passed away, the United Negro Improvement Association started this annually. Cooks was the head of the Legionnaires army of the UNIA. He said, ‘At least let us honor the man by having a parade in his memory.’ Ashe!”

Activist Shaka Shakur emphasized an important principle to be adhered to within the freedom struggle. “We have to make this parade a symbol of unity ... so whatever differences we have, [they] cannot be so strong that you are willing to show disunity in front of the ones who stole you and brought you over here. We can’t come here, show face, then leave with animosity … that’s not the right spirit, and the enemy will play on that.”

After releasing a couple of white doves, drummers led the hundred or so participants as they marched west to Malcolm X Boulevard, up one block to Dr. Martin Luther King Jr. Boulevard, west again to Adam Clayton Powell Jr. Boulevard, north a few blocks, then detouring east across 134th Street—rather than 135th Street, as is traditionally done due to Harlem Week festivities—then down Malcolm X Boulevard, eastbound on King Boulevard, south on Fifth Avenue and back to the parade’s point of origin.

Activists mentioned preparing for next year’s 100th anniversary of Garvey founding the UNIA in Jamaica.

“We’re carrying on Cooks’ legacy by having this parade in Harlem,” concluded Sister Asantewa. “So please keep it up. We have got to stick together because we are having other folks who are celebrating Marcus Garvey, who are having the enemy finance their programs. Cooks is going down in history; we have to keep this going!”