Director Spike Lee attends screening of his film in Harlem 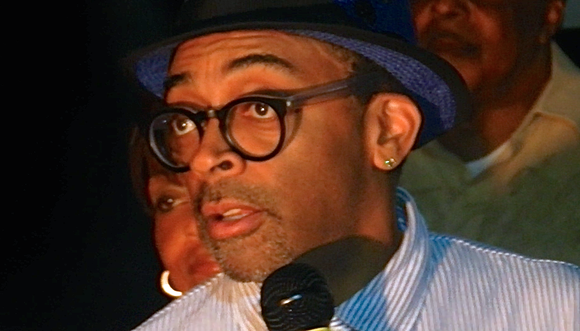 ImageNation presented a free, outdoor screening of “Jim Brown: All-American” on the Great Lawn of St. Nicholas Park on Saturday with a special guest appearance by the film’s director, Spike Lee.

A Harlem-based nonprofit media organization, the ImageNation Cinema Foundation has provided summer-long film and music festivals for 11 years. This summer, ImageNation has shown films that reflect a commitment to community in commemoration of the 50th anniversary of the March on Washington for Jobs and Freedom. In an interview with the AmNews, Lee confirmed that the story of Jim Brown, an African-American football player who became legendary amid the threat of racism, will always be relevant.

“Jim Brown is one of the greatest individuals today,” Lee said. “He’s done so much and has always been involved trying to advance us as a people. I’m happy [ImageNation] is showing my film, which some people might not have seen.”

Moikgantsi Kgama, founder and executive director of ImageNation, said she was excited to remind the audience about Brown’s contributions to society.

“I want people to really connect that in addition to [Brown] being a celebrity and an athlete, he had a deep commitment to community, and so do we,” Kgama said.

This is the second time that ImageNation has hosted an event with Lee, according to Kgama, who said that the organization “believed in him as a filmmaker.” In a video posted on YouTube, Kgama announced that the organization supported Lee’s newest project, a controversial crowdfunding campaign to raise money for his newest film. So far, Lee has been supported by thousands of people, who have donated more than $1.3 million.

Lee said little about his new film, only confirming that it would contain blood and violence. However, he did agree that raising his own money allowed him to make his film without “anyone telling him anything.”

He also encouraged the crowd of nearly 100 people, which included state Sen. Bill Perkins and Councilwoman Inez Dickens, to start their own crowdfunding campaigns.

“You can be artists, playwrights, inventors, anything,” Lee said. “If you have a good idea and put it out there, people will back it.”

ImageNation will kick off their own crowdfunding campaign in October to create the ImageNation Soul Cinema Café, which will be dedicated to screening Black and Brown films.