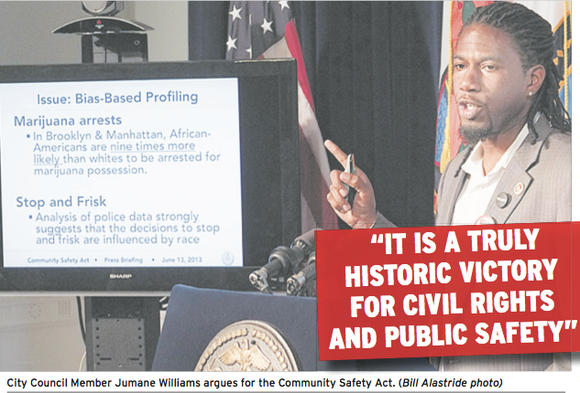 On the eve of the 50th anniversary of the historic March on Washington, the New City Council overrode Mayor Bloomberg’s veto of the Community Safety Act on Thursday, clearing the way for the city to increase oversight of the NYPD and giving New Yorkers the ability to sue the Police Department if they are racially profiled.

The City Council passed two bills, intro 1079 and 1080, collectively known as the Community Safety Act, late last month after more than three hours of deliberation. The act challenges the constitutionality of the NYPD’s Stop and Frisk tactics which predominately targets African-Americans and Hispanics without probable cause.

Bloomberg vetoed both measures following the passage, saying it would damage the way the NYPD does its policing. He said crime will increase if the bills goes into effect. Police Commissioner Ray Kelly has also defended the importance of the NYPD’s stop-and-frisk policy.

Intro 1079 of the act calls for the city to create an independent inspector general who will monitor and review police policy, conduct investigations and recommend changes the department needs. The other bill, Intro 1080, would give New Yorkers the ability to sue the NYPD if they believe they were profiled based on age, gender, housing status, ethnicity or sexual orientation. For the first time, LGBT New Yorkers will be protected from being harassed by law enforcement because of their sexual preference and gender identity, city lawmakers said.

The Community Safety Act will go into effect January 1, 2014.