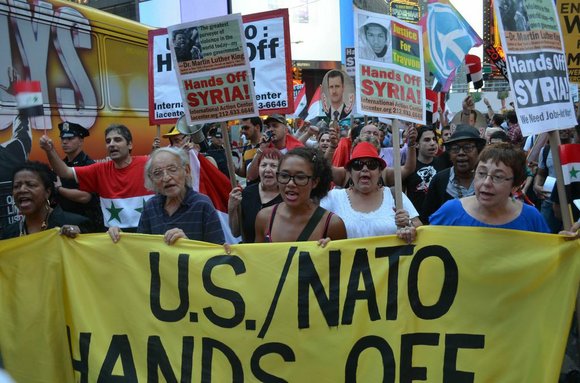 As President Obama weighed in on a possible military strike against Syria's regime, for allegedly using deadly chemical weapons against civilians without having any proof, hundreds of New Yorkers protested in Times Square on Thursday urging their government to stay out of Syria.

Demonstrators held their fists in the air, show pictures of Syria's dictator Bashar al-Assad and signs bearing pictures of Trayvon Martin and Martin Luther King jr. and chanted "We Need Jobs, We Need Peace. US come out of the Middle East," as they ventured through the thick crowd of Tourists. Some at the protest argued that the U.S. has no need for intervention in Syria and that they should give that same attention to issues that are affecting their own people.

"We send billions of dollars to other countries every year for war, meanwhile they are cutting programs here," said Delores Cox, one of the protestors in Times Square. "Look at the poverty here, especially in the black community," she questioned, while expressing her disappointment in President Obama's position on the issue.

"I'm not surprised of him, but it's very disappointing to see that we're still in the 50th Anniversary of the March on Washington. Look at what he [Obama] is doing. Americans need to wake up," she said.

But, a block down from the U.S. Armed Forces Recruiting Center on west 43rd street and 7th avenue where Cox stood, was Nezar Yabroudi and another protest group. They were surrounded by NYPD officers and barricades, to prevent altercation with the anit-war protesters, and were calling for US intervention. Both groups exchanged derogatory hand gestures, words and even exchanged death threats in their own languages.

"Seventy percent of the country is destroyed," said Yabrouid."It's been going on for three and a half years, so president Obama has to do something about it. I have two cousins who died because of the chemicals that Assad's regime has been using against them," he added.

According to published reportes, more than 300 Syrian civilians were killed by chemical weapons, a majority of them are women and children.

On Thursday, senior officials from Obama's administration said they will release a declassified version of an intelligence report about last week's chemical weapons attack in Syria. The administration said the government will go public with its legal justification for taking military action against the Syrian regime if and when President Obama orders a strike.

Also on Thursday, the British Parliament rejected Prime Minister David Cameron proposal for engaging in military action in Syria. After his defeat, Cameron told the press that he won't proceed without parliamentary approval, and that his government "will act accordingly."

It is unclear when President Obama will make a decision on the issue but it is expected he will take unilateral action against Syria.