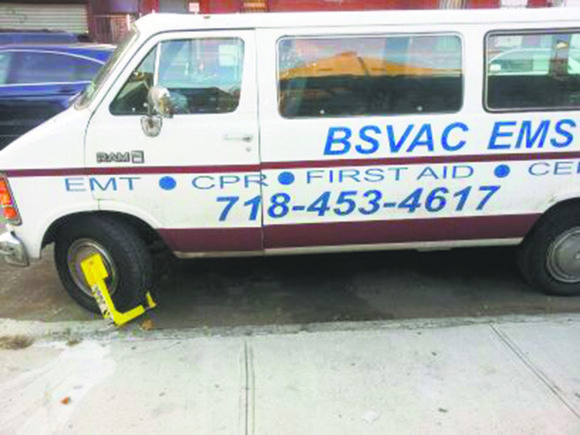 To his many friends and family in Bedford-Stuyvesant, Brooklyn, Cmdr. James “Rocky” Robinson is known for saving lives and creating new opportunities to help youth stay off the streets. Robinson, a retired captain and former military police officer, first established the Bedford-Stuyvesant Volunteer Ambulance Corps (BSVAC) back in 1988 during the crack cocaine epidemic in Brooklyn.

“Every other call was drug-related in Bedford-Stuyvestant. The ambulances during that time, the response time was anywhere from a half an hour to an hour—or sometimes not at all,” said Robinson.

Robinson grew up around the corner from BSVAC’s current home on 727 Green Ave. in Brooklyn.

“Because of our success, there is a lot of hate out there, even amongst the administration. Right now, the city has been trying to close this place down since day one because we’re people of color [who are] doing something and putting the city ambulances to shame. By the time they respond in Bed-Stuy, we’ve already got the patient to the hospital, and people don’t like that,” said Robinson.

As one of the first multicultural volunteer ambulance corporations in America, the New York not-for-profit organization has become a target for city marshals. Less than a month ago, a tire boot was placed on an ambulance truck sometime between 7 a.m. and 11 a.m. The boot caused mayhem for EMTs and staff on duty who depended on the vehicle to assist the elderly who may have suffered from cardiac arrest attacks during that time. Chief Rock-el Robinson, one of the five children of Robinson who assists in maintaining the corporation, said that at first glance, he thought the situation was just a joke.

“We didn’t even get a notice about that; we just came outside, and there was a boot on the ambulance truck. We just got two working ambulance trucks that we pay $22,000 in insurance for both trucks. We had no record of tickets,” said Rock-el Robinson.

BSVAC was forced to pay a $250,000 ticket out of its pocket, when it’s on a fixed income. City marshals booted the ambulance truck twice. The first encounter was on the organization’s CPR van, before the follow-up. There were no politicians or activists who offered to assist in donating to the corporation in order to help it pay off the fee. “It shows clearly EMT, CPR, first aid training with the boot on it! Wouldn’t something tell you, ‘OK, it’s not an ambulance, but it’s a training vehicle used to save somebody’s life’?” said James Robinson.

For over 25 years, the BSVAC’s academy has been operating in a trailer where certified EMTs train students, locals and future staff on how to assist on-call patients and what to do during an emergency. Ten years ago, James Robinson was dying from kidney failure. His miracle came in the form of one of his cadets, who offered Robinson one of his kidneys.

“We are heroes in the hood. That’s my cadets, they’re my heroes,” said James Robinson.

When the booting took place, students were not able to receive hands-on training to learn CPR and responsive tactics onsite. BSVAC Executive Officer Shanida Robinson said that the city is well aware of who they are and what the not-for-profit organization does on a daily basis within the community.

“With them booting the vehicle, whether they’ve indicated that it was a nonemergency vehicle, we do use that vehicle to provide training to people in the community. That is an emergency within our community. It was unfortunate that they did it,” stated Shanida Robinson.

“Please give us some financial aid so we can train our people with the proper equipment. After 25 years, we’re still collecting pennies and nickels on the street corners when these politicians have discretionary funds that they can give us. Even entertainers who came from this community should help. Don’t forget where you came from,” said James Robinson. He and his team hope that people will see the mission of BSVAC and donate to the cause in order to provide more resources within the Brooklyn community.

To find out more information about how you can volunteer or donate, go to www.bsvac.org.