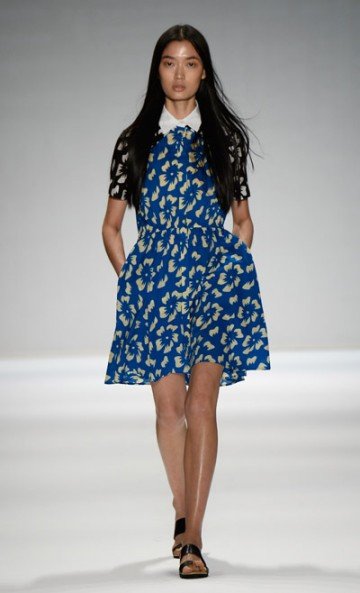 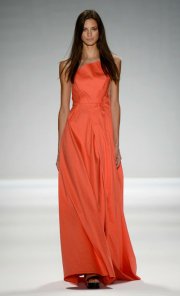 For spring ’14, Vivienne Tam didn’t focus on matching pieces or traditional styles. Her silhouettes are simple. She reached into her own archives for prints that were updated. In her tailoring techniques, she referenced classical Chinese tropes. There are luxurious lotus prints, embroideries and cutouts. Tam’s shirt-dresses have cinched waists. Slim pants are cropped. Skirts are fuller. Her clothes are very wearable. Her presentation at Mercedes-Benz Fashion Week at Lincoln Center was spectacular.

Tam was born in Canton, China, and she moved to Hong King when she was 3 years old. She credits her bicultural upbringing with setting the seeds for her signature East-meets-West aesthetic. Her contemporary women’s collection offering Eastern-inspired clothing debuted in 1994. Her influential MAO collection crossed over the fashion world in 1997, and in 1997, she launched her Buddha collection. She became known for her exotic imagery and passion for innovation.

The Andy Warhol Museum, the Metropolitan Museum of Art, London’s Victoria and Albert Museum and the Museum at FIT all house pieces from these collections. To FIT museum curator Richard Martin, Tam’s designs suggest tolerance, global acumen and a Fourth of July faith in individual expression. He said, “Tam possesses an idealistic globalism that transcends politics and offers a more enchanted, peaceful world.”

This cross-cultural design talent did not go unnoticed. While Tam was broadening her fashion imprint with major shows, retailers and multinational corporations, she also partnered with HP, Disney, Monster, George Jensen and Mandarin Oriental. As a member of the CFDA, Tam has enjoyed continued celebrity and recognition for her rich legacy and forward-thinking contributions to the fashion world. The collection is available in 30 freestanding retail stores and in over 100 specialty and department stores worldwide.