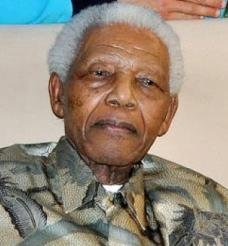 It takes a special individual to bring together musicians from different genres and artists from all walks of life. Activist and former South African President the late Nelson Mandela was one such individual. Whether it was Melle Mel and Gil Scott Heron rapping “Let Me See Your ID,” Little Steven Van Zandt singing “Sun City” or Sandra on “The Cosby Show” naming her twins Winnie and Nelson, Mandela’s activism had a significant reach in the music and entertainment world.

Not only did feet-on-the-ground activism play a role in Mandela’s eventual release from captivity, but pop culture—particularly music—also had a hand in swaying public opinion against apartheid and for businesses divesting in South Africa.

Stevie Wonder penned and performed the song “It’s Wrong (Apartheid)” and was arrested outside of the South African embassy in Washington, D.C., during a protest. Van Zandt and Artists Against Apartheid’s aforementioned “Sun City” tackled the debate about Western artists playing the whites-only resort in Bophuthatswana. Throughout the 1980s, artists like Elton John, Paul Anka, Frank Sinatra and Queen caught flack for playing the resort at the height of anti-apartheid activism.

But while activism centered on South Africa, there were issues involving the “Sun City” song that became a hit in America. In an ironic twist, a second version of the song that removed contributions from hip-hop artists like Melle Mel, Run DMC, Kurtis Blow and DJ Kool Herc was made for rock stations to play.

But music isn’t the only art form where the story of Mandela’s life made waves; the film world felt it as well.

News of Mandela’s death broke during a screening of the biographical film “Mandela: Long Walk to Freedom” in London. Anant Singh, the film’s producer, announced the death at the end of the screening and asked for a moment of silence. Naomie Harris, one of the actors in the film, released a statement expressing her sadness for Mandela’s passing.

“Long before we made this movie, I was inspired, as so many have been, by the leadership, grace and compassion of Nelson Mandela,” read Harris’ statement. “While no single film can replicate a person’s life, I am very proud to be part of our tribute to this extraordinary man. His accomplishments and approach to peace are lessons that will live on for generations.”

Outside of Idris Elba, who plays Mandela in “Long Walk to Freedom,” several other actors have taken on the task of playing the activist on screen. Morgan Freeman played Mandela in the 2009 film “Invictus,” about the events in South Africa surrounding the 1995 Rugby World Cup. Sidney Poitier played Mandela in the 1997 HBO film “Mandela and de Klerk,” which also starred Michael Caine. Dennis Haysbert, famous for the television show “24” and the “Major League” movies, played Mandela in the 2007 film “Goodbye Bafana.”

And for those wondering whether Hollywood will come up with a Mandela biopic, they already did in 1987, when Danny Glover played him in the film “Mandela,” while the real Mandela was three years away from leaving Robben Island.

But with his passing fresh in the minds and hearts of world citizens, it should be expected that Hollywood and the music world will respond.