David Koechner of ‘Anchorman’ isn’t a foul-mouthed racist; he just plays one in the movies 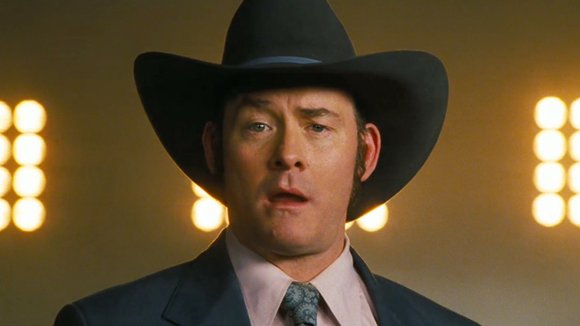 I’ve fallen in love with a sexist, racist man with repressed homosexual tendencies, and I’m confessing it with shameless passion.

His name is David Koechner, but the movie world knows him as Champ Kind, one of the hilarious misfits who delivers sports news in the “Anchorman” movies starring “Saturday Night Live” alumnus Will Ferrell.

Created by writer-director Adam McKay, “Anchorman 2: The Legend Continues,” which he co-wrote with Ferrell, is much more than just a sequel to the 2004 cult classic (which he also co-wrote). “Anchorman 2” is a hilarious and smart satire that examines the hypocrisy of the news business and the quest for power, money and great hair!

Kind, like most complex characters in comedies, was created to slap a big, fat, purple explanation point on the hot-button issues that plague and shape cultures all over the world: racism, sexism and the intolerable greed of corporations.

Koechner, the actor-singer and all-around good guy, is as different from the sports reporter he portrays as a warm fuzzy kitten is to, say, a 12-set baking kit!

The following phone interview took place inside a crowded Upper East Side coffeehouse.

It took me a full half hour before I noticed that I was on speaker phone. The good news is that Koechner had that crowd laughing—and that’s a hard room for comedy!

Amsterdam News: I’ve never had anyone sing my name. Thank you. I happen to love country music!

David Koechner: Thank you kindly, Miss Lapacazo (still singing). Hey, what did you think of the movie? No pressure. You know, the one I’m in, “Anchorman: The Legend Continues,” opening Dec. 18. No pressure … Lapacazo!

AmNews: Adam (McKay) sliced off the hairy arms of one of my favorite mythical creatures. Comedy is a cruel master.

AmNews: All is fair to the comedy gods. Hats off to Adam and Will for having an African-American woman as the head of a maverick, 24-hour All News Network, loosely spoofing CNN. A deliberate casting choice?

DK: Well, I can’t speak on Adam or Will’s behalf 100 percent, but I’m pretty certain that they both demanded an African-American character for that role. Megan [Goode] is good! She delivers on all levels!

Megan rocks the mike (stand-up comic pun intended). There is a very funny “meet the family” scene when her character introduces Ron Burgundy to her successful clan and … well ...

AmNews: Every known racial slur followed by inaccurate stereotypes paint the introduction? Is that the “family meets Ron Burgundy” scene you’re referring too?

That’s because I’m fairly certain that Adam and Will didn’t script it. They wanted to capture the impact of those absurd slurs and most importantly, I think, to show the sincere feelings those words have on others!

Hey, when we meet—and we will—remind me that you’re a song.

AmNews:I shall indeed. I’m jealous you’re paid to work with your friends! You laugh and make people laugh to the sound of “whammy” all the way to the bank!

DK: Whammy! (Laughing) That’s so true. I was just in Australia with Adam, and we both just had that “OMG, this is still real” series of moments. I’m a father of five, so there isn’t really enough money. They keep growing!

AmNews: When did your parents finally stop worrying about your career choice?

DK: (Laughing) Lapacazo (singing), you are good! My parents finally started to rest easy with the successful release of the last “Anchorman.” They now think this comedy thing just might be ...

AmNews and DK: A whammy!