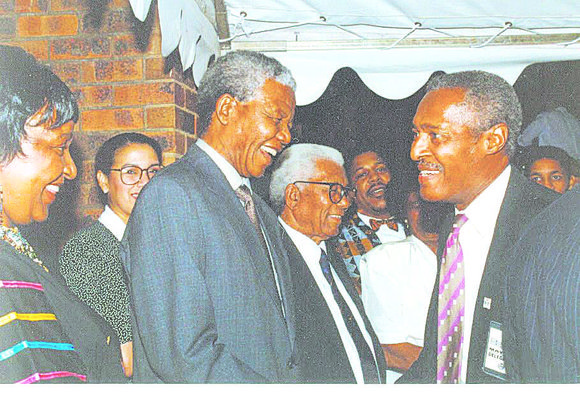 The flags that fly over City Hall and government buildings across the state were at half-staff in honor of Nelson Mandela. The late former South African president had an impact and influence on the city’s political landscape during his life.

As soon as word got out that the civil rights icon had died, New York’s politicos began their flood of tributes and remembrances for the late world leader.

Mandela had an impact on New York thanks to former Mayor David Dinkins, who brought him to the city in the 1990 after Mandela’s release from prison. He was aided by a political consultant, the late Bill Lynch.

At the time, South Africa’s apartheid system was a major issue for politicians, making Mandela’s visit monumental. Several local politicians who had long spoke out against apartheid were able to come in contact with the man who led the fight thousands of miles away.

The 1990 visit to the city was the first of several for Mandela. He came back to the city in 2005, giving an historical appearance at the Riverside Church.

Dinkins said of his longtime friend, “He, for me, is the greatest human being in the next hundred years worldwide, and I feel blessed to have lived in his time.”

Saturday’s event was originally supposed to be a platform for newly appointed NYPD Commissioner Bill Bratton to meet the community; however, upon Mandela’s death, the event took on a different meaning.

“Mandela spent his entire life fighting and suffering for what was right, and he emerged from his battles with grace and good humor, not anger or bitterness,” Rangel said. “He is my personal hero, and I will never forget how humbled I felt when I first met him. Ever since that day, I have thought to myself, ‘God spent a lot of time making Nelson Mandela.’”

Getting ready to head to City Hall himself, de Blasio said that the world is a better place because of Mandela. De Blasio was one of several people who joined the fight against apartheid and said that the fight brought many people together.

“I will never forget hearing his words at Yankee Stadium, where he told New Yorkers, ‘You, the people, never abandoned us.’ We came to believe in his fight for justice and democracy as if it were our own,” he said. “Our values and activism helped us work toward justice in South Africa and, thereafter, in many other parts of the world.”

Closing in his final weeks in office, Mayor Michael Bloomberg called Mandela one of the most transformative and influential figures in modern history. During Mandela’s 2005 visit to the city, Bloomberg presented him with a Key to the City.

“He devoted his life to building a more just, equal and compassionate world, and we are all better for it,” Bloomberg said. “On behalf of the people of the city of New York, I offer my sincere condolences to the Mandela family and the people of South Africa.”

New York State Gov. Andrew Cuomo said Mandela refused to accept injustice and showed that a dedicated person of courage can actually change the course of history. Cuomo ordered that flags on state government buildings be flown at half-staff on Friday, Dec. 6 in honor of Mandela.

“We will not soon see again, nor should we ever forget the profound example of humanity that Nelson Mandela embodied,” he said. “While President Mandala is no longer with us, here in New York and all around the globe, his legacy lives on. His family and friends and the people of South Africa are in my thoughts and prayers, along with those of all New Yorkers.”