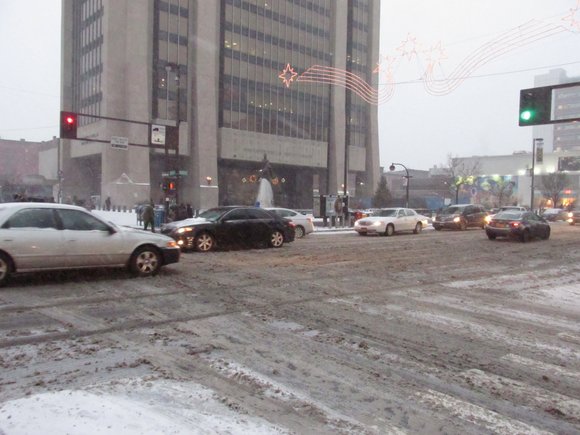 While it might be picturesque for the holidays, the city's first major snowstorm of the season forced the city to issue a snow alert across the five boroughs.

The National Weather Service (NWS) issued a Winter Weather Advisory from Saturday through Sunday morning in the Tri-State area.

Snow changed to freezing rain followed by all rain. Snow totals reached up to seven inches in some areas. Wind gusts were 45 mph with temperatures remaining cold.

Blowing and drifting snow made traveling hazardous for both drivers and pedestrians. Icy conditions posed a major threat.

The New York City Office of Emergency Management (OEM) Saturday issued a Hazardous Travel Advisory for warning all travelers to be extra careful when walking or driving.

Alternate side parking rules are suspended but meters are still in effect. All planned weekend work has been canceled on the subway. MTA is reportedly running at or close to schedule with a few minor delays.

Those headed to the airport are advised to call their airline carrier about any delays or cancellations before leaving home.