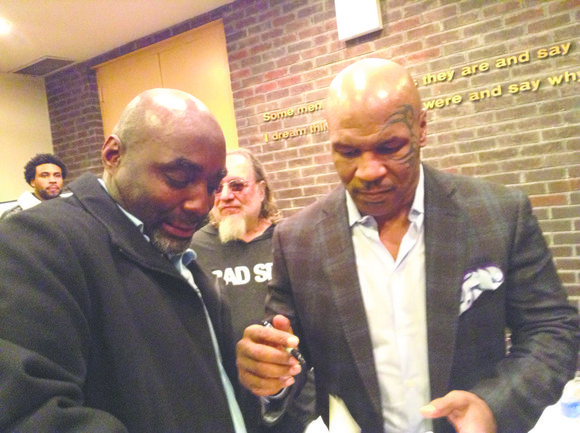 While the film version of Mike Tyson’s one-man play “The Undisputed Truth” played in the background, hundreds of people turned out to get their book signed by the former heavyweight champion at a packed event at Brooklyn’s Restoration Plaza on Friday, Dec. 13.

With writing collaborator Larry Sloman at the table, Tyson graciously hosted the panoramic range of fans. People from every walk of life filled the space, from babies to adults, Black, Latino, Asian and white. Cops from the 79th Precinct, some with books in hand, filled up the back of the hall, apparently waiting to meet the man.

After lighting the tree out on the Bedford-Stuyvesant plaza, the young Brooklyn-boy-done-good sat down for about three hours, signing books, greeting folks, listening to their “I knew you way back when” stories and standing up to pose for photos with dozens of people—Tyson, the Brownsville native, was home.

A surprise visitor and advocate for the book was fashion lord André Leon Talley. Thoroughly thrilled to be there, the former American editor-at-large for Vogue magazine told the AmNews, “To me, I compare it to the story of Homer’s ‘Iliad.’ The story of a modern-day Odysseus who is continuing his journey. He is a man of great achievement. You cannot read this book in one sitting because it is intense. It is so powerful, so vivid. It is epic. It is cinematic.”

Talley continued, “What comes out of this book is the redemption, love never known, love found, and love has sustained him with his wife Kiki and his family.”

It was an unexpected but positively enthusiastic endorsement of the book.Talley said it is “a true journey of a human being who gave so much to the world through the craft of boxing but, at the same time, was lost. Alone, tragically abusive, astoundingly iconic, going to the wars, overcoming the adversity and overcoming the way the world took him and ate him up literally, financially and spiritually, but, at the same time, there were many, many angels around him who protected him and gave him a sense of struggling to always be a better person.”