‘Christmas Story’ is family fun for the holidays 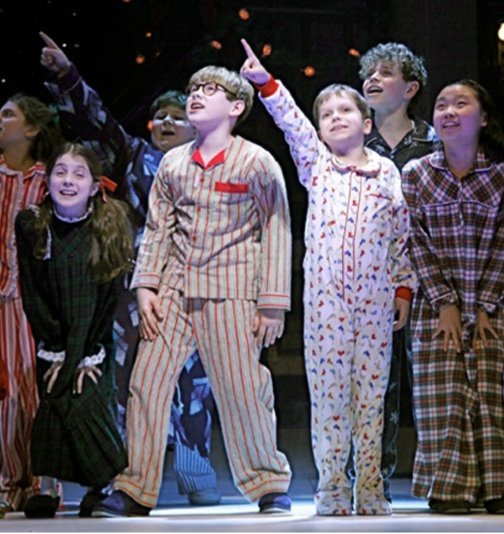 I hope the mounting of a production of “A Christmas Story: The Musical” becomes a holiday tradition. Last year my daughter Jasmine and I saw and loved it on Broadway. We laughed so hard we were in tears. This year, it is being presented at the Theatre at Madison Square Garden, and not only did my daughter Jasmine go with me, my older daughter Nikki did as well and she laughed as heartily as we did. The current production has many of the same main cast members and they are as amazing as they were before.

The first thing that I love about “A Christmas Story: The Musical” is that it is a heartwarming family musical. It takes one back to a simpler time when children were happy with red BB guns for Christmas. It was a time when children respected their parents, teachers and any adult figure, and the worst thing a parent had to worry about was a child using profanity and getting into fights.

This show is adorable, especially the way in which it has children—all incredibly talented—playing adult roles in various scenes. The entire cast is phenomenal, and this show beautifully emphasizes the importance of the family unit and the roles that each person in a family plays. There are key moments in the musical when the role of the mother is portrayed so beautifully. She is the person who cleans the house, cooks the food, takes care of her family’s needs, fixes the booboos and can make a serious and seemingly doomed situation come out just fine. She is the glue that holds everything together. The father is the person who works, provides and fixes things around the house, often using profanity when a job doesn’t go his way. Whatever the roles the parents play, they are the guides of their children and help them to become people of character. Funny and very wholesome is the best way to describe this musical.

There are so many phenomenal dance numbers, and the stars of the scenes are often the children. These kids dance with such style and precision, you will find yourself just sitting in the audience mesmerized and thrilled. The singing of everyone on the stage is something that delights the imagination. This cast is so incredibly talented. One number that is a great deal of fun is “You’ll Shoot Your Eye Out.”

This musical is also about the good kid coming out on top. It’s about the childhood bully finally getting what’s coming to him. There are so many reasons to feel upbeat and happy as you watch “A Christmas Story: The Musical.” As you sit there, you just feel that warm, tender feeling overtake your body. You know that you’re experiencing something that is beautiful, heartwarming and a fantastic representation of what family means and the most important thing to have during the Christmas holiday, and that is love.

There are too many perfect performances in this musical, as each actor, from the leads to the supporting cast, holds their own, but I will mention the names of the wonderful stars, including Dan Lauria, who plays Jean, the adult version of his childhood character Ralphy. John Bolton plays his old Man (father) and Erin Dilly (mother). Noah Baird plays his little brother Randy and Ralphy is played by Jake Lucas. This production has a hilarious book by Joseph Robinette and marvelous music and lyrics by Benj Pasek and Justin Paul, perfect choreography by Warren Carlyle and engaging direction by John Rando.

“A Christmas Story: The Musical” is a must-see! For more info, visit achristmasstorythemusical.com.