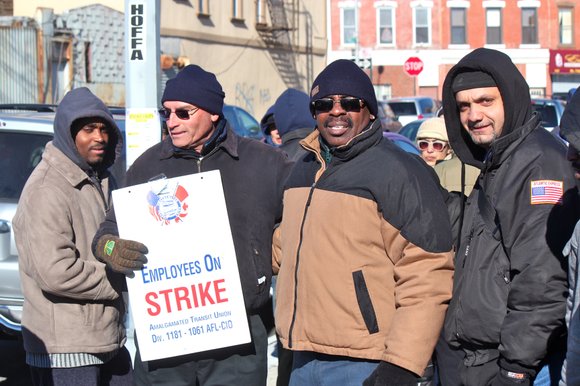 A recent report by the Bureau of Labor Statistics revealed that the percentage of union members among the American workforce dropped to its lowest in 97 years at 11.3 percent in 2012 (down from 11.8 percent in 2011).

"The number of wage and salary workers belonging to unions, at 14.4 million, also declined over the year," read the report. "In 1983, the first year for which comparable union data are available, the union membership rate was 20.1 percent, and there were 17.7 million union workers."

The report also stated that Blacks are more likely to be union members than any other racial group, although there have been increases in membership among Latino and Asian Americans. The public sector has a union membership rate that's five times higher than the private sector's (35.9 percent and 6.6 percent, respectively). Among states, New York had the highest rate of union membership in the country at 23.2 percent.

George Gresham, president of 1199 SEIU, attributed the decrease in labor to laws and practices that favor management and business over labor rights.

"It's a proven fact that union members have higher wages, better health care and a more secure retirement, so why aren't more workers joining unions?" Gresham asked. "The answer is that our labor laws favor big business and do not allow Americans to have a democratic voice at work. Executives exploit these laws and use high-priced consultants to intimidate workers, disseminate false information and make it impossible for workers to have a fair union election. 1199 SEIU has been growing--we've added 100,000 members in the past 10 years--but all of us need to do more to build a revitalized labor movement for working families."

But AFL-CIO chief economist William Spriggs believes that the bureau's report is missing a few things and recommended that others not take it at face value. He told the AmNews that the report doesn't mean doom and gloom for unions.

"The first point is that you have to have a job in order to be in the survey," Spriggs said (the report was a part of the Current Population Survey, a monthly poll of close to 60,000 households that obtains information on employment and unemployment among the nation's civilian non-institutional population over the age of 16). "This is more a story on the weakness of the labor market and the strange economic recovery than about the labor movement itself when you pull back the numbers. California and New York have the highest union density, but New York lost union members and they were all in the public sector.

"There are four states that count for half of all union membership lost, and most is that is in the public sector," Spriggs said. The union economist also pointed out that union membership is up in states like Texas and Oklahoma and other "right to work" states.

Spriggs believes the downturn is a combination of $1 trillion in public pension funds being lost to the recession coupled with current state Republican governors' hostility to unions.

Gresham told the AmNews that lobbying and proper organizing can help unions withstand the blowback and the bad news.

"We need to put more resources towards organizing non-union workers and reform our country's labor laws so workers have a fair process for joining unions," Gresham said. "We also need to clearly communicate how unions are relevant and strongly support issues that matter to working families, such as protecting Medicare and Social Security and passing immigration reform."