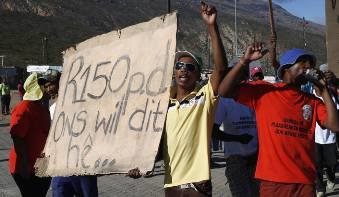 Feb. 5 (GIN) - The South African government has begrudgingly agreed to raise up the minimum wage of farmworkers who were earning $7.82 daily to a new minimum of $11.77 daily. The announcement, by Labor Minister Mildred Oliphant, ends three months of strikes that claimed three lives and interrupted fruit harvests.

The higher wage has already prompted loud outcries from business leaders who warn they will be forced to mechanize, lay off workers or close their farms.

Labor leader Tony Ehrenreich rejected the threats, saying that claims by farmers that they could not pay the new salary could lead to them losing their land.

"If they can't use it, they must lose it. This is a country that has shown it cares about farm workers. Bad farmers will lose their land in favor of good farmers who choose to work with us as a country," he said.

The Daily Maverick, a pro-worker news site, opined cautiously: "On paper, a wage jump of 52% rings out like a stunning victory for farmworkers. But as usual in a South African context, there is more to consider here. The first is the pitiful base from which the wage is rising. The second is the long-term effects of the raise. If, as farmers claim, it will lead to a much smaller pool of more highly paid workers - that sounds like it might be a recipe for a long term disaster in the already wildly unequal society."

Still, a loophole exists for farm owners who say they cannot afford the increase. They will be allowed to apply for an exemption, the Labor Minister said, as long as they provide proof in the form of financial statements.