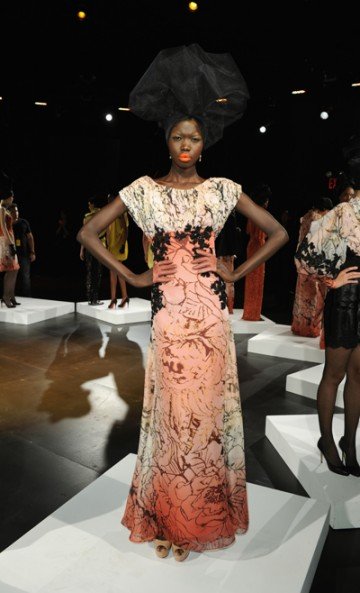 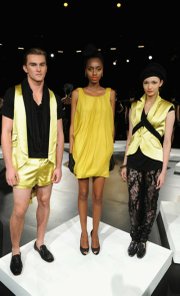 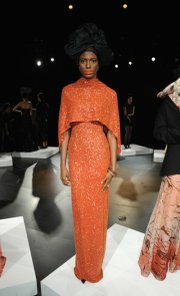 Since he launched his brand nine years ago, South African native David Tlale has showcased his fun and futuristic dynamic fashions at all of the premium fashion-show venues and he has etched his mark as a favorite on the South African and African fashion landscapes. His meaningful presentation during this season's Mercedes-Benz Fashion Week at NYC's Lincoln Center received rave reviews.

Renowned for his undeniable knack for showmanship and elaborate designs, Tlale consistently produces work that's both daring and dramatic. His still presentation displayed a variety of styles, from long and short fashions and looks for men and women. It's a brand that defies convention and a label that unapologetically employs fabric, color and texture in unpredictable ways.

This young designer of color has taken his work around the world. He has also partnered with a number of influential brands in South Africa. In 2009, he was awarded Fashion Designer of the Year at the Arise Africa Awards. Later in the year, he made his debut at Mercedes-Benz New York Fashion Week with a collection that was noteworthy for more than its unusual name, "Cultural Intimacy."

In early 2011 at Joburg Fashion Week, Tlale presented his quintessential Made in the City collection in celebration of the 92 years of Nelson Mandela's life. Tlale sent 92 models down the runway on what was deemed the longest ramp in the history of South African fashion: the Nelson Mandela Bridge.

Tlale has enjoyed outstanding exposure on both the local and international catwalks since beginning in 2003. However, his label goes far beyond just fashion designs. In 2008, one of his proudest moments included his appointment as an ambassador for the Change 4 Ever campaign, an initiative that aims to alleviate poverty in South Africa.