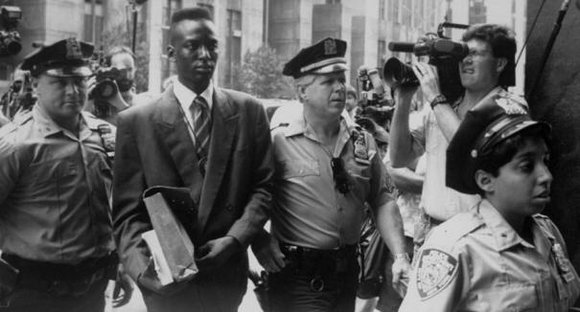 At the beginning of "The Central Park Five," a new documentary film by Ken Burns, Sarah Burns (his daughter) and David McMahon, it's mentioned that members of New York City's government and the New York Police Department declined to participate in interviews for the film.

And why would they? It would be an admission of wrongdoing on a grand scale. It would also call into the question the careers of many in government and law enforcement who have built a life on the backs of five innocent young Black and Brown men who were vindicated and exonerated long after they had served their time. Nevertheless, "Central Park Five" is an amazing time capsule of New York City in the late 1980s-early 1990s and an example of how certain things haven't changed in over 20 years.

The similarities between today's New York and the New York displayed in the film tells the tale of two cities. With the new influx of money via Wall Street, the '80s represented a boom for much of Manhattan. Gluttony was displayed on a grand scale while many New Yorkers became real-life Gordon Gekkos, but if you headed uptown to Harlem, Washington Heights and the Bronx or Brownsville and Bedford-Stuyvesant in Brooklyn, the stench of poverty couldn't be escaped.

Raymond Santana, Yusuf Salaam, Korey Wise, Kevin Richardson and Antron McCray found themselves at the center of an outcry against rampant crime in the city and the case of a beaten, battered, bruised and raped young white woman in Central Park. Through coerced videotaped confessions, with no DNA match to be found, the boys were on the hit list of everyone in the city, from the media to then-Mayor Ed Koch, then-New York Gov. Mario Cuomo and even media whore himself Donald Trump, who took out full-page ads in several tabloids demanding the death penalty for the boys. A perfectly orchestrated set of actions by the NYPD made sure that the boys didn't have a chance.

The interviews with the five boys, who are now men, are striking. They bring a humanity to them not seen through the media during the trial or after the revelation that Matias Reyes was the real culprit in 2002. Regardless, some in the media still doubled down on the belief that the videotaped confessions were enough.

While Richardson, Wise, Salaam, Richardson and Santana provide heavy weight to the film, it's McCray's interviews that really hit home. This isn't because he says anything different than the other four, it's that his interviews are strictly audio, coupled with pictures of his 14-year-old self walking in and out of court. (He declined to be on camera for the film, wanting to move on with his life.) With the image of the 14-year-old in the viewer's head, the confusion, fright and vulnerability the young man must have felt is humanized more than seeing the face of an adult McCray.

The filmmakers also speak with New York Times writer Jim Dwyer, lawyer Michael Warren, historian Craig Steven Wilder and countless others who speak to the miscarriage of justice conducted in front of New York City's residents in order to satiate a public that had been engulfed in crime and race-based strife, from Michael Stewart to Yusuf Hawkins to Eleanor Bumpers to the infamous Howard Beach incident.

Ken Burns has already displayed his documentary acumen through "Jazz," "Baseball," "The Civil War," "Prohibition" and "The National Parks," and there's potential Oscar talk surrounding "Central Park Five." The film makes its case through a simple display of the humanity--good and bad--of all parties involved in the "crime of the century."

"The Central Park Five" opens in theaters on November 23.