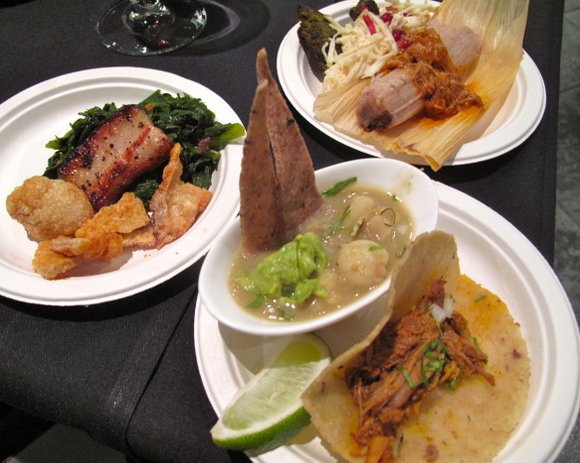 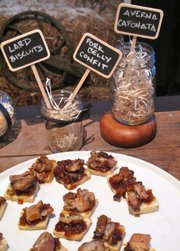 A couple of Sundays back, I had the pleasure of attending Cochon 555 at Chelsea Piers for a 10-city culinary competition and tasting that felt like a family affair. As if requested by the gods, the sun was just starting its nightly ritual, painting the sky full of colors and evoking our senses to rise up and meet the moment. Five chefs, five heritage pigs and five wineries were at the ready. I took it all in.

Each of the women in the all-female chef lineup received a different whole heritage animal with which to have their way, from snout to tail. And these aren't just any female chefs--they are accomplished and inventive chefs who transform ingredients to food nirvana.

After enjoying the last sustainable oyster from Rappahannock River, my first bite came by way of "Top Chef" contestant Chef Leah Cohen of restaurant Pig & Khao (www.pigandkhao.com). Her pig was a Large Black. Sounds like a mean son of a gun, but its type has been bred and perfected by farmers for more than a century. Cohen gave an Asian sensation of five-spice cracklings served in a paper bag, a tangy sausage with rice and crispy pata (pork leg with pickled green mango). All were so good that I couldn't imagine the magic from the other chefs.

I moved on to Chef Missy Robbins of A Voce, who was perched in the corner with the Hudson River behind her and her team. She took her coveted Berkshire pig to task with six tastings that literally went from the head, Testa (pig's head terrine), to the feet, Stufato, and everywhere in between. The meatballs were moist and packed with flavor. I enjoyed her version of ham and eggs made with prosciutto, black truffles and fontina and her version of liver and onions with a caramelized cippoline, dried grapes and balsamic.

As if by magic, the walls parted for the last two competing chefs. Chef Alex Guarnaschelli of Butter and Chef Elizabeth Falkner of Krescendo squared off on either sides of the room. Between them stood a bourbon bar featuring five bourbons to celebrate five years of Cochon 555. I'm not really a bourbon drinker, but being served in a mason jar with some macerated black cherries made it go down easy.

Guarnaschelli went Asian with her Old Spot-Duroc Cross (a.k.a. Spot Roc). There was a soup dumpling and seared pork belly, but the real palate-pows were the noodle dish made of the skin and the sweet-and-savory gelatin cubes made of pork renderings and lychee puree lightly dusted with sugar. I see you, chef! Doin' it!

Falkner would not be outdone with her Red Wattle pig from Lazy S. Farm in Kansas. If there were an award just for cracklings, she would have gotten my vote (take note, Brady Lowe) for the creatively spiced addictive bites. She also served up black rye pasta with pork ragu and pork belly confit over a lard biscuit.

While this was all going down, Sara Bigelow of the Meat Hook in Brooklyn was butchering a whole Berkshire pig to be auctioned off, there was a Tartare Bar with tartare made from two different cuts of beef, and errant jars of perfectly cooked thick-cut bacon floating around. Not to be outdone, Buty Winery's Columbia Rediviva Cabernet-Syrah blend was rich and bold, and Spring Brook Farm's Tarentaise Vermont Alpine cheese sprung to life on my palate, giving a welcomed temporary reprieve from all the porky goodness.

An honorable mention goes to Chef Sue Torres of Suenos for ending the evening with a full dinner made from a Gloucester Old Spot. Tamales, tacos, righteous sausage, cracklings, pork belly and stew--just when you think you are out, she pulled you right back in!

Cochon 555 was the best food event I have been to in some time. Not too big, not too small, but filled with fun and excited heritage pork lovers. Robbins was crowned the Princess of Porc and will go on to compete at the Grand Cochon event at the Food & Wine Classic in Aspen on Sunday, June 16.

I am looking for three Harlem foodies and "Talking SCHOP!" readers to join me for dinner at Harlem's newest food destination, Harvist at MIST. Email, tweet or Facebook me about your best food experience in Harlem using #HarvistInHarlem. Looking forward to hearing from you!

Enjoy, get eating and thanks for reading!

Kysha Harris is a food writer, culinary producer, consultant and owner of SCHOP!, a personalized food service offering weekly and in-home entertaining packages. Questions? Comments? Requests? Feedback? Invitations! Email her at kysha@iSCHOP.com, follow her on Twitter @SCHOPgirl or Facebook at www.facebook.com/SCHOPnyc, or chat with her on Instant Messenger at AskSCHOP, Monday-Friday, 6 to 8 p.m. For even more recipes, tips and food musings, subscribe to her blog at www.talkingSCHOP.wordpress.com.