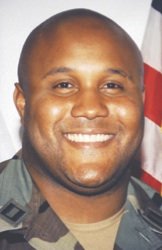 After evading capture for almost a week during a massive manhunt by law enforcement agents that began on Feb. 6, former Los Angeles cop Christopher Dorner, 33, apparently perished in a cabin inferno in the Big Bear area on Tuesday night.

Dorner seemingly thought his actions would help eradicate police corruption and racism, which he felt he was a victim of after being dismissed from the force for violating the police's code of silence. Dorner had reported a colleague who allegedly had physically brutalized a mentally ill man.

"Unfortunately, this is a necessary evil that I do not enjoy but must partake and complete for substantial change to occur within the LAPD and reclaim my name," he proclaimed in a lengthy manifesto released Monday. "The department has not changed since the Rampart and Rodney King days. It has gotten worse."

Meanwhile, Black men in the vicinity were on heightened alert.

San Diego attorney Don Oden confides: "I got some friends who are large, Black men, who have bald heads, who should be concerned. There may be people thinking, 'There's a large Black man, it could be him, I could get paid,' so I think that $1 million reward could be counterproductive."

With a high-priced bounty on his head, the Black cop continued to unleash his wrath on other law-enforcement personnel and their family members, shooting five cops, killing two of them and slaying two civilians.

"The Dorner manhunt has activated a deep-seated cultural distrust of the criminal justice system that seems to resurface during high-profile events, such as the Rodney King beating, the O.J. Simpson case, or more recently, the Trayvon Martin shooting," contends Travis Gosa, assistant professor of African studies at Cornell University.

He continues: "Many Black Americans still believe that racism makes Black men a target. The sense is that police are not interested in protecting and serving Black communities. Instead, the police are seen as part of a larger plot to re-enslave Blacks in their own communities, or to restore a type of new Jim Crow system of segregation."

Race relations between Black men and law enforcement is a very sensitive subject.

"The chickens came home to roost! One of their very own, trained and brainwashed by them, made a statement about what goes on behind the blue wall," observed social critic La Meh Nua. "After he realized he was just another n!&&@ in their eyes, he struck at the source of his problem."

One Black cop speaking in anonymity said, "The pressure a Black cop faces from his Caucasian colleagues in the precinct is greater than the stress from the criminals in the streets."

Dorner was hired by the LAPD on Feb. 7, 2005, and fired Sept. 4, 2008. In the Board of Rights hearing that resulted in his termination, Dorner was represented by then-LAPD Capt. Randy Quan, the father of 28-year-old Monica Quan, who along with her fiance, 27-year-old Keith Lawrence, was found shot dead in a parked car Sunday morning, according to Irvine Police Chief David Maggard.

"I never had the opportunity to have a family of my own ... (so) I am terminating yours," Dorner wrote to Randy Quan.

It was reported Wednesday morning that a charred body had been removed from the burned building's debris, but it was not confirmed to be Dorner's. LAPD say they are still seeking the Navy reservist until either his arrest or death is confirmed.