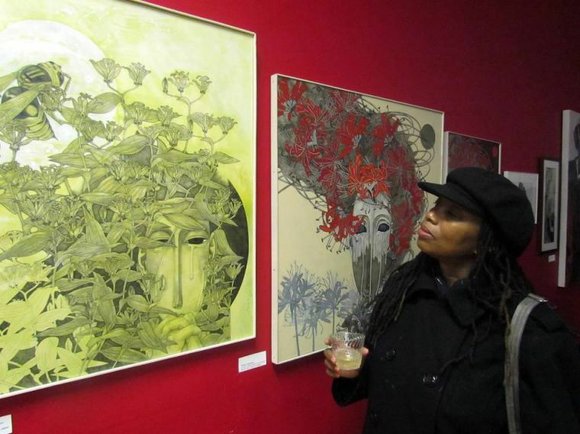 Artists create from what they know. My interest in street art and those souls who make the city their personal canvas started after I saw a painting of a snazzy man with his hat pulled over his eyes; he could see everyone, but no one could see him.

The raw image moved me. My spirit understood the spiritually-sighted blind man and his quest for personal safety in a dangerous world.

The art also ignited my curiosity because the artist, a young Puerto Rican man, didn't fit my ignorant image of a deep thinker or a fine artist.

He's a menace to society. He's been to prison. It's not a label he enjoys attached to his name but one that he, sadly, earned in his early youth.

He now pours the perfect cappuccino and uses his street art as an outlet for pain from his past. He no longer hides paint cans along hidden routes, dodging police officers and risking life and limb to tag streets in acts of false bravado. Most importantly, he no longer associates with the troubled, misguided gangs of his youth.

Instead, between selecting the perfect coffee blends for caffeine-addicted customers, he is teaching himself how to paint and is experimenting with canvases and Instagram.

When I shared my conversation with Erika Pettersen Director of Exhibitions of ARTs East New York, and the opportunity to submit his work for an official gallery mounting, he went blind, dumb and deaf on me.

Ms. Pettersen is a champion for the arts. To wit, she extended the submission deadline from March 1 to March 7 in an effort to help spread the word even more.

ARTs East New York's 2013 exhibit, "Off the Street," will explore the complicated question: What is left of street art once it's taken off the street?

Artists submit without fear. "Off the Street" will feature a few works from those submissions; the art will be more than just gallery-ready replications of artwork on the street, but explorations extending the space of the "street" from the physical to the conceptual.

Ms. Pettersen recently sat down to a Q&A with the AmNews

Amsterdam News: Why street art in a gallery setting?

Erika Pettersen: Street art being displayed in a gallery setting is a really popular trend at the moment. The reason why is only something I can speculate on.

The current art market is always looking for the next best thing and trying to keep edgy in order to attract buyers. Street art's traditional setting is beyond the edges of gallery walls, so appropriating this medium in a gallery space is the very definition of "cutting edge." I also think that such shows are a reflection of another renaissance taking place, emulating the raw, urban appeal that the borough offers.

I'm excited about the trend, but oftentimes, such gallery exhibits fall a bit flat. The reason for this is that they don't take into account that the artwork has been removed from its original context. That has to be made up for. Artworks in the Off the Street exhibit will hopefully address how art remains authentically "street" with a move such as that from a warehouse wall to canvas.